Skip to main content
SPRING CYBER EVENT STARTS NOW: And it's a really BIG deal! Up to 88% off through 5/24>
The Berenstain Bears and the Missing Dinosaur Bone - eBook
By: Stan Berenstain, Jan Berenstain
Stock No: WW15982EB 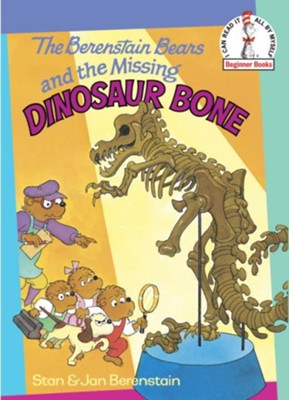 The Berenstain Bears and the Missing Dinosaur Bone - eBook

▼▲
Stan and Jan Berenstain invite readers to help solve a mystery in this beloved Beginner Book. When a dinosaur bone goes missing from the Bear Museum, it’s up to the Berenstain Bears to help crack the case. From the Mummy Room to the Hall of Famous Bears, the detectives seek every possible hiding place. Can Brother and Sister Bear find the culprit in time for the museum’s grand opening?

Originally created by Dr. Seuss, Beginner Books encourage children to read all by themselves, with simple words and illustrations that give clues to their meaning.

▼▲
Stan and Jan Berenstain were both born in 1923 in Philadelphia.  They didn't know each other as children, but met later at school, at the Philadelphia College of Art.  They liked each other right away, and found out that the both enjoyed the same kinds of books, plays, music and art.  During World War II, Stan was a medical assistant in the Army, and Jan worked in an airplane factory.  When the war was over, they got married and began to work together as artists and writers, primarily drawing cartoons for popular magazines.  After having their two sons Leo and Michael, the Berenstains decided to write some funny children's books that their children and other children could read and enjoy.  Their first published children's book was called The Big Honey Hunt.  It was about a family of bears, who later became known as the "Berenstain Bears."


Stan and Jan planned all of their books together. They both wrote the stories and created the pictures.  They continued to live outside of Philadelphia in the country.  There are now over 300 Berenstain Bears books.

▼▲
"A bone is missing from the Bear Museum, and the cubs are determined to find it. Colorful drawings and the bear antics are always a hot item."--School Library Journal.

▼▲
I'm the author/artist and I want to review The Berenstain Bears and the Missing Dinosaur Bone - eBook.
Back
Back