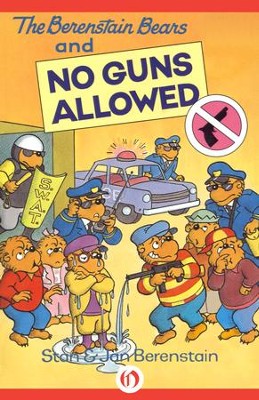 The Berenstain Bears and No Guns Allowed - eBook

When Bear Country School becomes a place filled with the constant rat-a-tat-tat of violent video games, the nerd Ferdy and the jock Too-Tall are forced to team up for a school project on inventions—one that includes guns. It’s up to the teachers and students to make things more peaceful—especially when Too-Tall brings a realistic water gun to school as a prank. Bear Country School will learn an important lesson about dealing with weapons and violent play.

▼▲
Stan Berenstain (1923–2005) and Jan Berenstain (1923–2012) were a husband-and-wife cartooning team best known for creating the internationally beloved Berenstain Bears. Both born in Philadelphia, they met on the first day of art school, and were married after World War II. Inspired by their children’s love for Dr. Seuss, the Berenstains created a cartoon version of their own family, and with The Big Honey Hunt (1962) began a series that would stretch to more than two hundred volumes.

Starring Papa Bear, Mama Bear, Sister Bear, and Brother Bear, the books quickly became popular for their evocative drawings and simple explanations of wholesome themes. The stories sold more than 200 million copies worldwide and have been adapted as movies, television shows, and amusement park attractions. The Berenstains’ younger son, Mike, has overseen the series since his parents passed away, ensuring that it will continue to be popular with each new generation of young readers.

▼▲
I'm the author/artist and I want to review The Berenstain Bears and No Guns Allowed - eBook.
Back
×
Back
×