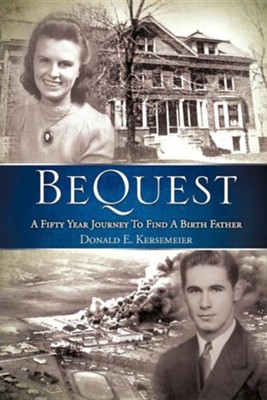 ▼▲
February 1998 I have a growing sense of who is my biological father. I may never know for sure in this life even though some circumstances are formidable indicators. There are still questions and the need for proof positive. March 2001 When I explained my problem to the lab director, and what I had available to work with, he was somewhat dubious. The analysis of envelopes and stamps that had crossed an ocean and been stored in a box for sixty years might be problematic. He told me he would attempt an analysis. He would need a sample of my DNA. May 2001 Several weeks went by. Then, Friday evening, May 28, 2001, I was mowing the grass in the side yard. At exactly 7:34 p.m. Mary came out on the deck with the white kitchen phone saying the call was for me. "It's the lab." For thirty-six years Don worked as a teacher and an administrator in several suburban Chicago schools. Once retired, he could focus on several writing projects including the book you are holding. Don grew up in Wausau, Wisconsin. After graduating from Wausau Senior High, he attended Lawrence University, Appleton, Wisconsin, earning a B.A. degree. While at Lawrence, he secured a fellowship including summer studies at the University of California, Berkeley and an academic year at Delhi University, India. Don also earned both a Master of Arts in Spanish Literature and a PhD in Curriculum and Instruction at the University of Wisconsin, Madison. Don travels extensively, most recently with his wife Mary as they accompany each of their ten grandchildren on trips the kids choose. Currently Don is mining dozens of notebooks he has filled since age sixteen for more material for another book. A collection of poems awaits publication.

▼▲
I'm the author/artist and I want to review Bequest.
Back