Skip to main content
SPRING CYBER EVENT STARTS NOW: And it's a really BIG deal! Up to 88% off through 5/24>
Beowulf: The Oldest English Epic
By: Charles W. Kennedy
Stock No: WW24354 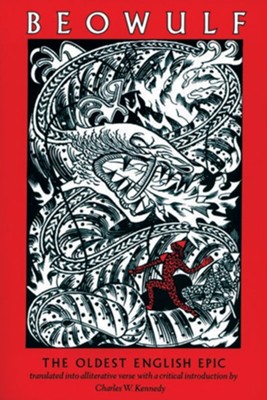 ▼▲
The Beowulf is a priceless heritage from the earliest age of English poetry. Forgotten for centuries and rediscovered, it has at last, by the devotion of many scholars, come into its own, unfolding before us its ancient excellence. Across the centuries from the England of Bede, it proclaims the ideal of gentleness united to strength, and valor ennobled by virtue. It speaks to the modern world in moving accents, of honor, of courage, and of faith. It is a tale of a vanishing age retold in the dawn of a new day. The pagan gods were fading into the darkness; new light was upon the world. The flash and thunder of Thor were not wholly forgotten; but the bolt was spent, and the echoes dying. The old legends of violence and blood formed shadowy background for a tale of Christian courage and virtue. Twice in a heroic lifetime mortal valor was pitted in crucial conflict with the ravening forces of evil. Twice a hero turned back the invading dark. In his youth he conquered and lived; in age, he conquered and died.
This uniqe poetic rendering brings the experience of this earliest extant English poem closer to the modern reader. It uses the four-beat alliterative measure without attempting to reproduce the conventional Old English half-line. Consonance and assonance have also been freely used to retain the stylistic feeling of the original while keeping the language readable and contemporary.

▼▲
This new poetic translation brings the earliest extant English poem closer to the modern reader. Kennedy offers a translation in alliterative verse, based on Klaeber's text, of the Old English Beowulf, and provides a brief critical introduction which reviews literary and cultural discussions
of the poem.

▼▲
I'm the author/artist and I want to review Beowulf: The Oldest English Epic.
Back
Back