Skip to main content
Beowulf and Other Old English Poems - eBook
By: Constance B. Hietatt
Stock No: WW11005EB 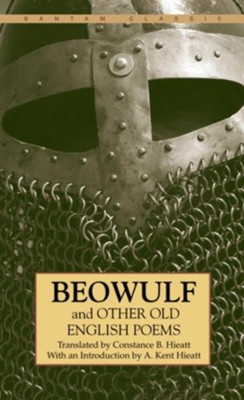 ▼▲
Unique and beautiful, Beowulf brings to life a society of violence and honor, fierce warriors and bloody battles, deadly monsters and famous swords. Written by an unknown poet in about the eighth century, this masterpiece of Anglo-Saxton literature transforms legends, myth, history, and ancient songs into the richly colored tale of the hero Beowulf, the loathsome man-eater Grendel, his vengeful water-hag mother, and a treasure-hoarding dragon. The earliest surviving epic poem in any modern European language. Beowulf is a stirring portrait of a heroic world–somber, vast, and magnificent.

▼▲
The identity of Beowulf’s author and the exact date and place of its composition are unknown. A single copy of the poem, dated about the year 1000, survived Henry VIII’s destruction of England’s monasteries and was collected by Sir Robert Cotton. This copy was damaged, but not disastrously, in a library fire in 1731 and was finally placed in the British Museum in 1753. The Danish scholar Thorkelin had copies made of it in 1787 and published the whole of it for the first time in 1815. Originally untitled, it is named after its hero, Beowulf, and is divided into two parts: In the first part the young Beowulf battles the monster Gredel and Grendels vengeful mother; in the second, an aged Beowulf kills a fire-breathing dragon but is himself mortally wounded.

No historic Beowulf is known to have existed, but some events described in the poem did take place in the sixth century. Early scholars tried to prove that more than one poet wrote the work, but it is now generally accepted that, like the Iliad’s Homer, there was one composer of Beowulf, who took the stories, legends, and myths of his culture’s oral traditions and bound them together with his own artistic vision. Written in England at least fifty years after the conversion of the Anglo-Saxons to Christianity, and perhaps much later, the poem is recognized today as the longest and greatest poem extant in Old English–yet it describes an ancient heroic society of Danes and Geats in Scandinavia; there is not one word about England, or about the people who come to be known as the English, in the poem.

▼▲
I'm the author/artist and I want to review Beowulf and Other Old English Poems - eBook.
Back
Back