We are OPEN and SHIPPING - click here for shipping estimates
PRE-SUMMER CYBER SALE EXTENDED thru 6/1 ~ Over 2,500 items up to 90% off
Beowulf: A Verse Translation
By: Michael Alexander 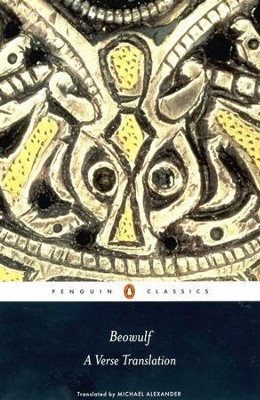 ▼▲
Beowulf stands at the head of English literature; a poem of historical interest and epic scope. Although the first manuscript of Beowulf dates from around the year 1000 CE, it is thought that the poem existed in its present form from the year 850. Beowulf's adventures themselves stand in front of the wide historical canvas of 5th and 6th century Scandinavia. Against this heroic background of feuding and feasting, Beowulf first kills the monster Grendel and her mother, and later defends his people against a dragon in a battle that leaves them both mortally wounded.

▼▲
"Alexander's translation is marked by a conviction that it is possible to be both ambitious and faithful [and] ...communicates the poem with a care which goes beyond fidelity-to-meaning and reaches fidelity of implication. May it go on ... to another half-million copies." - Tom Shippey, Bulletin of the International Association of University Professors of English

Beowulf is the greatest surviving work of literature in Old English, unparalleled in its epic grandeur and scope. It tells the story of the heroic Beowulf and of his battles, first with the monster Grendel, who has laid waste to the great hall of the Danish king Hrothgar, then with Grendel's avenging mother, and finally with a dragon that threatens to devastate his homeland. Through its blend of myth and history, Beowulf vividly evokes a twilight world in which men and supernatural forces live side by side. And it celebrates the endurance of the human spirit in a transient world.

▼▲
Michael Alexander (translator) is Berry Professor of English Literature at the University of St Andrews. He has translated The Earliest English Poems, The Canterbury Tales: The First Fragment, and Beowulf for Penguin.

▼▲
I'm the author/artist and I want to review Beowulf: A Verse Translation.
Back
×
Back
×