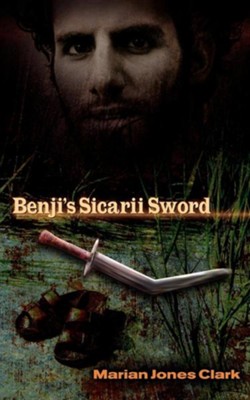 ▼▲
TO PROVE HIS LOYALTY and in revolt against his tax-collector father's plans for his future, Benji sneaks away to join the Sicarii ("dagger-men") who want to throw off the Roman occupation of Israel. Their curved swords make them some of the most feared ? and admired ? men in the land. Benji imagines a glorious uprising with himself wielding a sharp sica. However, his running off leads to Joss' rapidly increasing lying. Ransom demands on his rich father. A deadly skirmish against a Roman platoon. And Yesshua's amazing new double miracle. In this series based on the Gospel story, three ordinary young people - and their arch-enemy - try to uncover the secret of Yeshua's "miracles" for their own purposes. As the new Teacher ("Magic-Maker," some call him) does wondrous things, the friends reckon his two terrorist disciples, Judas Iscariot and Simon the Canaanite, will join them in making Yesshua king, driving out the Romans and rescuing Israel. Read-aloud. Ages 8-12. Marian Clark, a ten times great-grandmother, is a veteran missionary. She loves writing novels, opportunities to interpret for her Hispanic friends, organ music, and the Red Raider basketball team. She now lives in the Midwest, but travels every chance she gets.

▼▲
I'm the author/artist and I want to review Benji's Sicarii Sword.
Back