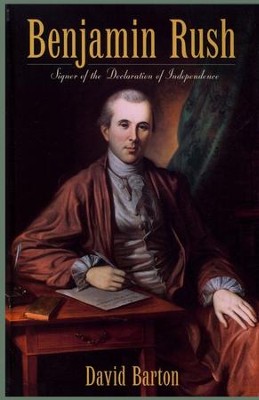 ▼▲
Dr. Benjamin Rush was a great American hero and role model. At the time of his death in 1813, he was heralded as one of America's three most notable men, along with George Washington and Benjamin Franklin. And no wonder! He was a signer of the Declaration of Independence, served under three Presidents, helped found five universities and colleges, is titled "The Father of American Medicine," led both the abolition and prison reform movements, and founded American Sunday Schools and the nation's first Bible Society. Amazingly, two hundred years ago, Dr. Benjamin Rush offered insights still applicable today. Learn about the inspiring life of Dr. Benjamin Rush, and read from his insightful writings--many of which are here reprinted for the first time in two centuries! Dr. Benjamin Rush--a true American hero!

▼▲
I'm the author/artist and I want to review Benjamin Rush.
Back