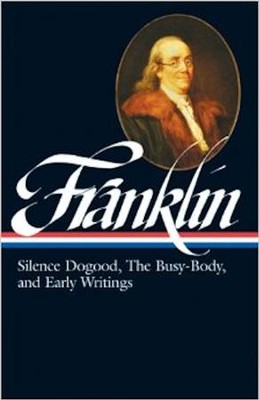 By: Benjamin Franklin
More in Library of America Series
Penguin Random House / Hardcover
Write a Review
New. Expected to ship on or about 07/20/21.
Stock No: WW082228

▼▲
Statesman, scientist, philosopher, printer, and civic leader, Benjamin Franklin was also the most powerful writer of his time. From his first appearance in print, in the guise of the eccentric, opinionated, voluble "Silence Dogood" (1722), to his last published article, a searing satire against slavery (1790), he covered every aspect of "the question of America" with radiant clarity, wit, and penetration.

This Library of America collection begins with items written by Franklin during his early years in Boston and London (1722–1726), including the complete "Silence Dogood" essay series. The volume also includes the famous "Busy-Body" essays (1728–1729); many of the news articles and essays he penned after he purchased the failing Pennsylvania Gazette (which eventually became the most widely read newspaper in the colonies); and various political satires, pamphlets, and personal correspondence written while he lived in Philadelphia from 1726 to 1757. The book concludes with material he published while a diplomat in London from 1757 to 1775 (including letters to the press, satires, and pamphlets).

Controversial in his own time, and the subject of vigorous debate ever since—to Matthew Arnold he exemplified "victorious good sense," while to D. H. Lawrence he was "the first dummy American"—Franklin emerges in this collection as a figure of extraordinary complexity for readers to discover, consider, and appreciate anew.

LIBRARY OF AMERICA is an independent nonprofit cultural organization founded in 1979 to preserve our nation’s literary heritage by publishing, and keeping permanently in print, America’s best and most significant writing. The Library of America series includes more than 300 volumes to date, authoritative editions that average 1,000 pages in length, feature cloth covers, sewn bindings, and ribbon markers, and are printed on premium acid-free paper that will last for centuries.

▼▲
Benjamin Franklin, statesman, philosopher, and man of letters, was born in Boston in 1706 of Protestant parents. He entered Boston Grammar School when he was eight and later attended George Brown Ell’s school. When he was twelve his father apprenticed him to his half-brother James as a printer. James was later the publisher of the New England Courant, where Franklin’s first articles, The Dogood Papers, were published before he was seventeen. He went to Philadelphia in 1723 and pursued his trade of printer. He was befriended by William Keith, Governor of Pennsylvania, who offered to help the young man get started in business. Franklin left for England, where he hoped to arrange for the purchase of printing equipment. Arriving in London in 1724, he was soon deserted by Keith, and again turned to printing for a livelihood. His privately printed Dissertation on Liberty and Necessity, Pleasure and Pain (1725) introduced him to leading Deists and other intellectuals in London. A year later, he returned to Philadelphia, and by 1730 he had been appointed public printer for Pennsylvania. In 1731 he established the first circulation library in the United States; in 1743-44, The American Philosophical Society. In 1748 he retired from the trade of printer but continued to advise and back his partner and to draw profit from the business. Poor Richard’s Almanack was his most spectacular success as a publisher, having gone through numerous editions and been translated in many languages. During the next thirty-five years he devoted himself largely to politics and diplomacy, but still wrote and engaged in scientific ventures. He resigned as Minister to France in 1785, returned to America, and was elected President of the Commonwealth of Pennsylvania. Still concerned with the rights of the individual, he published papers encouraging the abolition of slavery. He died in Philadelphia in 1790.

▼▲
I'm the author/artist and I want to review Benjamin Franklin: Silence Dogood, Busy-Body.
Back