Skip to main content
SPRING CYBER EVENT STARTS NOW: And it's a really BIG deal! Up to 88% off through 5/24>
Benjamin Franklin: The Religious Life of a Founding Father
By: Thomas S. Kidd
Stock No: WW240177 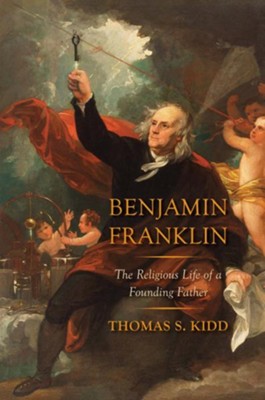 Benjamin Franklin: The Religious Life of a Founding Father

▼▲
"Kidd brings a unique set of gifts to this biography. He is, first of all, a scholar. Accuracy and balance mark his careful writing. The book is based on extensive research, but it's also a book the non-specialist can enjoy,"---Englewood Review of Books. Though a deist, Franklin was influenced by devout Christians all of his life. 288 pages, softcover.

"Kidd vividly brings Franklin’s spiritual quest to life throughout his book, and he provides a direct line from Franklin’s beliefs to those we see around us today."—Randy Dotinga, Christian Science Monitor

Renowned as a printer, scientist, and diplomat, Benjamin Franklin also published more works on religious topics than any other eighteenth-century American layperson. Born to Boston Puritans, by his teenage years Franklin had abandoned the exclusive Christian faith of his family and embraced deism. But Franklin, as a man of faith, was far more complex than the "thorough deist" who emerges in his autobiography. As Thomas Kidd reveals, deist writers influenced Franklin’s beliefs, to be sure, but devout Christians in his life—including George Whitefield, the era’s greatest evangelical preacher; his parents; and his beloved sister Jane—kept him tethered to the Calvinist creed of his Puritan upbringing. Based on rigorous research into Franklin’s voluminous correspondence, essays, and almanacs, this fresh assessment of a well-known figure unpacks the contradictions and conundrums faith presented in Franklin’s life.

▼▲
Thomas S. Kidd is distinguished professor of history and associate director of the Institute for Studies of Religion at Baylor University. His books include American Colonial History: Clashing Cultures and Faiths and Great Awakening: The Roots of Evangelical Christianity in Colonial America.

▼▲
"Kidd vividly brings Franklin’s spiritual quest to life throughout his book, and he provides a direct line from Franklin’s beliefs to those we see around us today."—Randy Dotinga, Christian Science Monitor

"Based on rigorous research into Franklin’s voluminous correspondence, essays and almanacs, this fresh assessment of a well-known figure unpacks the contradictions and conundrums faith presented in Franklin’s life."—Times Record

"[Benjamin Franklin is] an intellectual history, an important discussion by a scholar who knows the subject . . . this book is necessary in its focus. . . . What was Franklin thinking? I suspect Kidd bring us as close as we are going to get to an answer."—Charles S. Adams, Reading Religion

"[Kidd] has a popular audience in mind, although scholars will surely consider assigning it to their upper division history classes. . . . Accessible, thoughtful, and carefully researched."—Sheila Skemp, Reviews in American History

"A fascinating biography that focuses on Franklin's spiritual life. . .The author succeeds in explaining Franklin's beliefs and how they evolved over his lifetime."—S. Scott Rohrer, Anglican and Episcopal History

Winner of the 2017 Choice Award for Outstanding Academic Title


"Was Benjamin Franklin a Christian? A polytheist? A skeptic? A deist? This lucid, engaging book offers a compelling new interpretation of Franklin’s faith. A must read for anyone interested in the beliefs of the Founders."—Catherine A. Brekus, author of Sarah Osborn’s World

"Thomas Kidd has been quietly but impressively redrawing our map of early American intellectual and religious history. In this book, he turns to one of that history’s central, and yet most elusive, figures to demonstrate the underappreciated role religion played in Franklin’s thinking."—Wilfred M. McClay, University of Oklahoma

"Five weeks before his death, Benjamin Franklin wrote a letter which seemingly answered questions about his religious faith. But his supposed openness was enigmatic. Thomas S. Kidd’s excellently written exploration of Franklin’s faith delves deeper into this mystery."—George Goodwin, author of Benjamin Franklin in London: The British Life of America’s Founding Father

"This important book tells the story of religion’s impact on Benjamin Franklin. As a fellow Philadelphian, I learned so much in Kidd's book that I never knew, including fascinating details of the relationship of this Founding Father and the great evangelist George Whitefield."—Former Congressman Frank Wolf

"A convincing portrait of Franklin’s religion as ambiguous, elusive, enigmatic, and whimsical. He appears in the pages of this welcome book as a forerunner of many later Americans who believe in God, trust in providence, but cannot embrace any particular Christian creed."—Mark A. Noll, author of In the Beginning Was the Word

▼▲
I'm the author/artist and I want to review Benjamin Franklin: The Religious Life of a Founding Father.
Back
Back