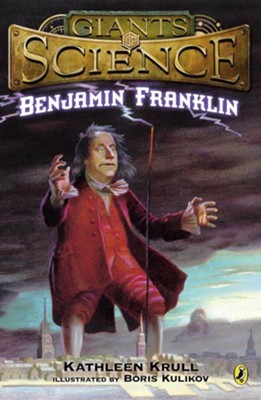 By: Kathleen Krull
Illustrated By: Boris Kulikov
More in Giants of Science Series
Puffin Books / 2014 / Paperback
Write a Review
Expected to ship on or about 08/08/20.
Stock No: WW511782

▼▲
The electrifying biography of innovative scientist Benjamin Franklin is the perfect addition to this outstanding series!
Benjamin Franklin is a famous colonial inventor and multitasker who may be best remembered as one of America’s Founding Fathers. But he was also a “natural philosopher” (the term for scientists back in the 1700s), whose experiments led to important discoveries about the nature of electricity—including his famous demonstration that electricity and lightning were one and the same. In a fantastic addition to the much-lauded Giants of Science series, this biography sheds new light on the man who considered science his true calling in life.


Praise for the Giants of Science series:

“With an inviting, conversational narrative, this series launches with an impressive start.” —Publishers Weekly, starred review of Leonardo da Vinci

“The second title in Krull’s Giants of Science series meets, and perhaps even exceeds, expectations set by the debut, Leonardo da Vinci. Krull and Newton are a match made in heaven….” —Bulletin of the Center for Children’s Books, starred review of Isaac Newton

“Krull lives up to the promise of the first two entries in her Giants of Science series with this lucid and thoughtful examination of Freud’s life, work, and legacy.” —Kirkus Reviews, starred review of Sigmund Freud

Boris Kulikov, the illustrator of this series, lives in New York City.

▼▲
I'm the author/artist and I want to review Benjamin Franklin.
Back
×