Skip to main content
SPRING CYBER EVENT STARTS NOW: And it's a really BIG deal! Up to 88% off through 5/24>
Benjamin Franklin - eBook
By: Kathleen Krull
Illustrated By: Boris Kulikov
Stock No: WW48154EB 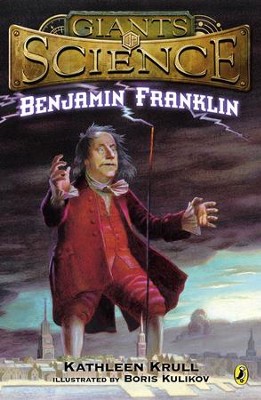 ▼▲
Sure, almost all kids know Benjamin Franklin as one of America’s Founding Fathers, a man with a hand in both the Declaration of Independence and the U.S. Constitution. And they may even have some vague idea that he once flew a kite during a lightning storm. What Kathleen Krull sets out to do in this very different biography is show Ben Franklin the "natural philosopher" (the term for scientists back in the 1700s), whose experiments led to important discoveries about the nature of electricity—including his famous demonstration that electricity and lightning were one and the same.

As always, this much-lauded series presents a true Giant of Science in a juicily anecdotal way. This is social history at its best. . . . who knew that Franklin became such a megastar that Paris shops sold Ben dolls, Ben ashtrays, even Ben wallpaper?

Witty and engaging, this is a worthy addition to the Giants of Science series.

Boris Kulikov, the illustrator of this series, lives in New York City.

▼▲
I'm the author/artist and I want to review Benjamin Franklin - eBook.
Back
Back