Skip to main content
SPRING CYBER EVENT STARTS NOW: And it's a really BIG deal! Up to 88% off through 5/24>
The Benefit of Christ: Living Justified Because of Christ's Death
Edited By: James M. Houston
By: Juan de Valdes, Don Benedetto
Stock No: WW832510 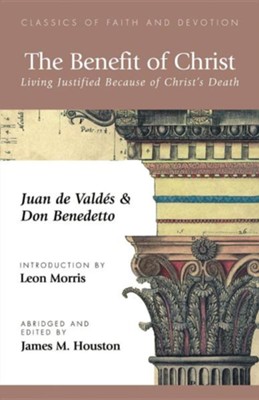 The Benefit of Christ: Living Justified Because of Christ's Death

▼▲
Almost unknown by evangelical Christians today, Juan de Vald's and Don Benedetto were Italian Reformers who penned what are probably the two most significant works of the Italian Reformation: One Hundred and Ten Considerations and On the Benefit of Jesus Christ, Crucified. Both writers protested not merely against the corruption of the Roman Catholic Church, as Martin Luther did, but went further to challenge the Italian humanism of the Renaissance. While John Calvin's Institutes richly teach the doctrine of the atonement by faith, the thought of Juan de Vald's reflects more of a struggle and debate among a group of friends about how the experience of justification by faith is actually lived out. The writings of Don Benedetto develop similar ideas about the centrality of Christ's death, and the role that assurance and joy play in the Christian life.

▼▲
I'm the author/artist and I want to review The Benefit of Christ: Living Justified Because of Christ's Death.
Back