Skip to main content
Beneath the Summer Sun
By: Kelly Irvin
Stock No: WW348080 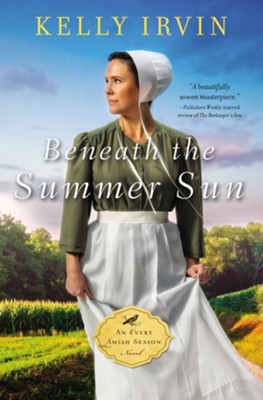 Beneath the Summer Sun

Four years after Jennie Troyer’s husband dies in a farming accident, the elders in her Amish community express that it’s time for her to marry again for the sake of her seven children. They think that grief is holding her back from a new relationship, but instead, it is fear of being in another abusive marriage.

A Mennonite book salesman Nathan Walker stops by Jennie’s farm when he’s in the area. The two enjoy years of conversation and dinners together, yet she never seems to relax around him. He knows he should move on, but something about her keeps drawing him back.

Leo Graber has been in love with Jennie since his teenage years. Guilt over his father’s death put a stop to him moving forward with her. Now he is hoping for a second chance.

Jennie Troyer knows it’s time to remarry. Can she overcome a painful secret and open her heart to love?

It’s been four years since Jennie’s husband died in a farming accident. Long enough that the elders in her Amish community think it’s time to marry again for the sake of her seven children. What they don’t know is that grief isn’t holding her back from a new relationship. Fear is. A terrible secret in her past keeps her from moving forward.

Mennonite book salesman Nathan Walker stops by Jennie’s farm whenever he’s in the area. Despite years of conversation and dinners together, she never seems to relax around him. He knows he should move on, but something about her keeps drawing him back.

Meanwhile, Leo Graber nurtures a decades-long love for Jennie, but guilt plagues him—guilt for letting Jennie marry someone else and guilt for his father’s death on a hunting trip many years ago. How could anyone love him again—and how could he ever take a chance to love in return?

In this second book in the Every Amish Season series, three hearts try to discern God’s plan for the future—and find peace beneath the summer sun.

▼▲
'Jennie's story will speak to any woman who has dealt with the horror of abuse and the emotional aftermath it carries, as well as readers who have questioned how God can allow such terrible things to happen. The choice Jennie makes to take a chance on love again and to open her heart to God after all she has suffered is brave and hopeful, leaving readers on an uplifting note.' -- RT Book Reviews, 4 stars

'This second entry in Irvin's seasonal series diverges from the typical Amish coming-of-age tale with its focus on more mature protagonists who acutely feel their sense of loss. Fans of the genre seeking a broader variety of stories may find this new offering from a Carol Award winner more relatable than the usual fare.' -- Library Journal

▼▲
I'm the author/artist and I want to review Beneath the Summer Sun.
Back
Back