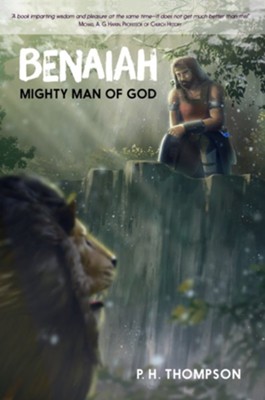 Tell us a little about yourself.  P.H. Thompson is a former oncology nurse, turned writer. When not writing, she leads women's Bible studies, speaks at women's conferences, spoils her two active grandchildren, and takes long naps to recover. She and her husband live near Toronto and have two adult daughters.

Benaiah: Mighty Man of God is her first novel.

What was your motivation behind this project?  First, like most writers, I'm also a reader, and Biblical fiction is a genre I really enjoy. The section of Scripture it's based on, 1 and 2 Samuel, and a part of 1 Kings has so many exciting stories to work with. By taking a minor character, like Benaiah, who was David's chief bodyguard, I felt I could tell familiar stories through his eyes, since he would have been there and been privy to many conversation and events. Mostly, I start any novel by asking questions: Who was that servant on the roof with David that evening? It must have also been one of the mighty men, since he knew who Bathsheba was. But what would make him obey such an order? This was the first scene I wrote, then I worked backwards to give him his motivation for obeying at all costs. His inciting incident (which is what writers call the event that set him on this trajectory of his life of obedience) was the tragic consequences of disobedience when he was young. I wondered how he felt once he saw the consequences of his actions. My research led me to wonder who Benaiah was. He is always mentioned in connection with his father, Jehoiada, who was a priest. As the son of a priest, he would also have been expected to become one, yet he became a soldier instead. So I explore that as well.

What do you hope folks will gain from this project?  A few things. First, I hope my readers will first of all just enjoy the story and imagine themselves there with Benaiah, at David's side. I want these familiar stories to come alive and have readers think about some of the deeper issues the story brings out, like grace, faithfulness in marriage, consequences of sin, and God's sovereignty. I want them to feel his ethical dilemmas along with him. Even though three thousand years separate us, people are still the same. He struggled with many of the same issues as you and I do. We want God to accept us. Is it just about obedience? What role does grace play? I want the story to drive them to Scripture to re-read these events and picture Benaiah there as they happen. I want them to see the people in Scripture as real people. For those unfamiliar with these stories, or for those who would never open a Bible, I think it will surprise them to see that all these things are there in Scripture to teach us and to show that there is forgiveness even for scarlet sins like adultery and murder. And as one of my endorsements says, I want it to be a book imparting both wisdom and pleasure at the same time.

How were you personally impacted by working on this project?  My research taught me that an ariel was more likely a platoon of soldiers than a lion-like man. That made me respect him more. I was also impressed with his lifetime of obedience which led to his appointment to the head of the army under King Solomon. Once I imagined how Benaiah thought and what he desired (redemption/acceptance by God) I could imagine how he would think in the various events of David's life. The hardest scene to write would have to be the death of David and Bathsheba's child. I actually wrote it on the train on my way into a night shift and it made me cry. Note to self: don't write an emotional scene in public.

Who are your influences, sources of inspiration or favorite authors / artists?  I enjoy reading other Biblical fiction by Jill Eileen Smith, Tracey Higley, Mesu Andrews, and Angela Hunt.

Anything else you'd like readers / listeners to know:  In historical fiction, it is the author's duty to be true to the events that happened, and then to use poetic license to fill in the gaps. I feel the standard is even higher with biblical, historical fiction. So I feel the pressure to get it right, but I only flesh out the unknowns.