Skip to main content
Ben Hur: A Tale of the Christ - eBook
By: Lew Wallace
Stock No: WW71305EB 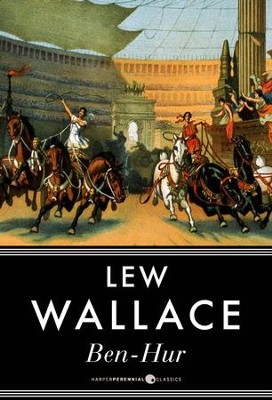 Ben Hur: A Tale of the Christ - eBook

In first century Judaea, Jewish prince Judah Ben-Hur is betrayed by his childhood friend Messala and sentenced to life as a Roman slave. When, during a pirate attack in the Aegean, Ben-Hur saves the life of a galley commander, his fortunes improve and he returns to Galilee a free man. There, his quest for vengeance turns into insurrection, but his life is transformed when he witnesses Christ’s baptism by John the Baptist.

Ben-Hur: A Tale of the Christ, the best-selling novel of revenge and redemption, has been enormously popular since its publication in 1880. Ben-Hur has been translated into multiple languages, and adapted for radio, the stage, and television numerous times. The 1959 MGM movie starring Charlton Heston won eleven Academy Awards, a record it shares with Titanic and The Lord of the Rings: The Return of the King.

Lew Wallace was an American lawyer, soldier, politician and author. During active duty as a second lieutenant in the Mexican-American War, Wallace met Abraham Lincoln, who would later inspire him to join the Republican Party and fight for the Union in the American Civil War. Following the end of the war, Wallace retired from the army and began writing, completing his most famous work, Ben-Hur: A Tale of the Christ while serving as the governor of New Mexico Territory. Ben-Hur would go on to become the best-selling American novel of the nineteenth century, and is noted as one of the most influential Christian books ever written. Although Ben-Hur is his most famous work, Wallace published continuously throughout his lifetime. Other notable titles include, The Boyhood of Christ, The Prince of India, several biographies and his own autobiography. Wallace died in 1909 at the age of 77, after a lifetime of service in the American army and government.

▼▲
I'm the author/artist and I want to review Ben Hur: A Tale of the Christ - eBook.
Back
Back