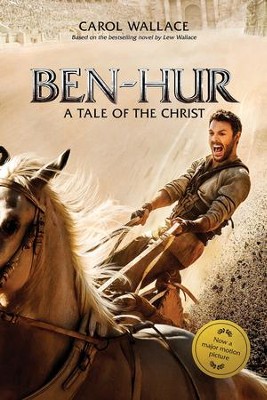 Ben-Hur: A Tale of the Christ

Ben-Hur A Tale of the Christ by Carol Wallace

Prolific author Carol Wallace has updated the classic tale penned by her great-great-grandfather over a century ago to make it more readable for a modern audience.  The iconic character of Judah Ben-Hur comes to life again.  Betrayal and an unjust sentence instill hatred in the heart of Ben-Hur, but meeting Jesus of Nazareth causes him to reconsider his desire for retribution.

▼▲
As one of the bestselling stories of all time, Lew Wallace’s Ben-Hur: A Tale of the Christ has captivated and enthralled millions around the world—both in print and on the big screen. Now Lew’s great-great-granddaughter has taken the old-fashioned prose of this classic novel and breathed new life into it for today’s audience.

Coming to theaters in August 2016 as Ben-Hur, a major motion picture from MGM and Paramount studios, the story follows Judah Ben-Hur, a Jewish nobleman whose childhood friend Messala betrays him. Accused of trying to murder the new Roman governor in Jerusalem, Judah is sentenced to the galley ships and vows to seek revenge against the Romans and Messala. But a chance encounter with a carpenter from Nazareth sets Judah on a different path.

Rediscover the intrigue, romance, and tragedy in this thrilling adventure.

▼▲
When Judah Ben-Hur, a Jewish prince alive during Jesus Christ’s lifetime, is wrongly accused of attempting to assassinate the Roman governor of Jerusalem by his childhood friend Messala, the Romans enslave him and capture his mother and sister. While working in the galley of a battleship, Ben-Hur saves the life of a Roman tribune, Arrius, who decides to adopt the former prince, change his name to Young Arrius, take him to Rome, and train the boy in the Roman ways, including the popular sport of chariot racing. While searching for what may have happened to his family, Ben-Hur takes advantage of an opportunity to challenge Messala to a chariot race. After establishing himself as a fierce competitor, Ben-Hur is persuaded to train an army that will support the rightful king of the Jews—who some believe to be a man from Nazareth. Unbeknownst to Ben-Hur, the true savior has different plans. Wallace (To Marry an English Lord)—the great-great-granddaughter of the author of the original Ben-Hur, Lew Wallace—has done a fine job of revising the text for modern readers. The narrative assumes some Biblical knowledge, as Ben-Hur comes into contact with characters from well-known Bible stories, including a wise man and Jesus himself. Patches of awkward dialogue contrast the lyrical, cinematic descriptions of Ben-Hur’s struggles and triumphs. The epic novel, spanning about 12 years of Ben-Hur’s life, will be relished not only by fans of Christian fiction, but any reader who craves historical accounts of high adventure, action, and drama.

▼▲
I'm the author/artist and I want to review Ben-Hur: A Tale of the Christ.
Back
Back