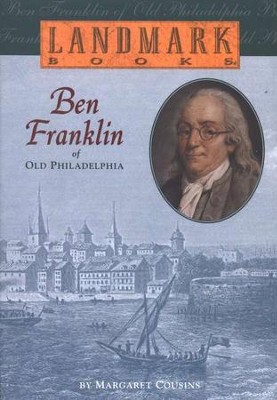 ▼▲
Ben Franklin ran away from Boston when he was just a teenager. Penniless, he seized his chances and through hard work, became a successful Philadelphia printer. Later, he pleaded for the union of the thirteen colonies and traveled to England to fight for American rights. He helped write the Declaration of Independence. Ben was also an inventor, a musician, and an author.

▼▲
Benjamin Franklin was one of the busiest men in the American colonies. He was a printer, a postmaster, an inventor, a writer, and a diplomat. When the Revolutionary War began, Ben supported America in the Continental Congress. Like the clever adages from his Poor Richard’s Almanac, Ben Franklin still sets an example for Americans today.

▼▲
Margaret Cousins was an editor and author of short stories and novels for children. In her career, she worked at Good Housekeeping and McCall’s. She was also senior editor at Doubleday and was fiction and book editor at The Ladies’ Home Journal. Cousins is the author of the Landmark Books Ben Franklin of Old Philadelphia and The Story of Thomas Alva Edison. She died in 1996.

▼▲
I'm the author/artist and I want to review Ben Franklin of Old Philadelphia.
Back
Back