Skip to main content
BIBLE SALE OF THE SEASON: For a Limited Time ~ Save on over 1,100 Bibles!
Ben and the Emancipation Proclamation
By: Pat Sherman
Illustrated By: Floyd Cooper
Stock No: WW855411 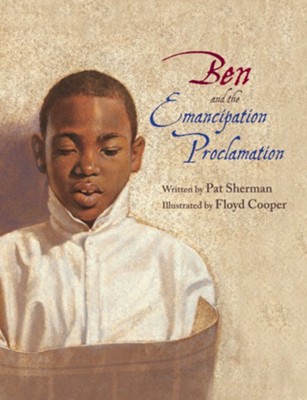 Ben and the Emancipation Proclamation

▼▲
Ben, a young slave, uses every chance he gets to teach himself to read, practicing with the words he sees on street signs and in shop windows and even in cast-off newspapers he finds in the gutter.

But after the Civil War breaks out, his master leaves town and Ben finds himself in a slave prison. One night, the prisoners bribe a guard to get their hands on a newspaper, and to the applause of his fellow slaves, Ben reads aloud the momentous news of Mr. Lincoln's Emancipation Proclamation — surely one of the most remarkable readings of that document ever.

Based on the true story of Benjamin Holmes, Pat Sherman's stirring text and the memorable illustrations of Coretta Scott King medalist Floyd Cooper pay tribute to the power of freedom — and to the power of the written word.

▼▲
Pat Sherman works as a writer, library professional, andwriting instructor in Cambridge, Massachusetts. Herprevious books include The Sun's Daughter,illustrated by R. Gregory Christie (Clarion), and severalnonfiction books for young people on historical subjectsranging from colonial America to the present day.
Floyd Cooper (1956–2021) won many prestigious awards for his illustrations, including the 2009 Coretta Scott King Illustrator Award for The Blacker the Berry, written by Joyce Carol Thomas (Amistad), and three previous Coretta Scott King Honors, a Da Vinci Award, and an NAACP Image Honor. Throughout his over thirty-year career, Floyd illustrated more than ninety books, including Unspeakable by Carol Boston Weatherford (Lerner), Meet Danitra Brown by Nikki Grimes (HarperCollins), Ben and the Emancipation Proclamation by Pat Sherman (Eerdmans), and Mississippi Morning by Ruth Vander Zee (Eerdmans). Floyd lived in Pennsylvania until his death in 2021. Visit his website at floydcooper.com.

▼▲
School Library Journal
"Based on the life of Benjamin Holmes, a slave who taught himself to read at a young age, this picture book is an inspiring account of overcoming oppression. Sherman's fictionalized telling is stirring, especially when Holmes revels in the discovery of new words; readers are moved to cheer on his clandestine efforts to learn. When Union troops approach Charleston, the tailor to whom Holmes is apprenticed leaves town, and the boy is imprisoned indefinitely with other slaves, and he is credited with reading the Emancipation Proclamation to his fellow inmates. The story culminates in a forceful scene when the inmates implore Ben to read the newspaper that contains Lincoln's history-making document. 'Louder,' someone called out. 'Stand up.'' Sherman's text has a stately simplicity. Cooper's paintings glow with a hopeful, golden warmth, and the best of them feature Benjamin and the other imprisoned slaves bearing witness and then celebrating as his voice rings out. This is a powerful tale of a bright ray of light in a very dark period in America."

Publishers Weekly
"Driven by Cooper's (The Blacker the Berry) textural, earth-toned oil paintings, this uplifting story spotlights the early life of Benjamin C. Holmes, born a slave in the 1840s."

Kirkus Reviews
"The story and its telling are inspirational, and Cooper's signature oil paintings featuring muted shades of brown are, as usual, lovely . . . a solid Black History choice for younger students."

▼▲
I'm the author/artist and I want to review Ben and the Emancipation Proclamation.
Back
Back