Skip to main content
Ben and the Emancipation Proclamation
By: Pat Sherman
Stock No: WW853196 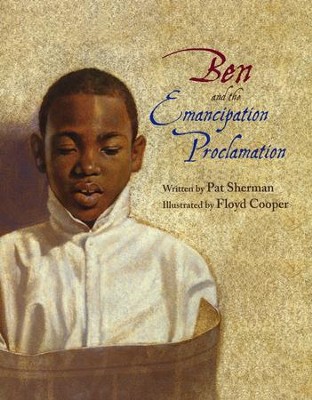 Ben and the Emancipation Proclamation

▼▲
Ben, a young slave, uses every chance he gets to teach himself to read, practicing with the words he sees on street signs and in shop windows and even in cast-off newspapers he finds in the gutter.

But after the Civil War breaks out, his master leaves town and Ben finds himself in a slave prison. One night, the prisoners bribe a guard to get their hands on a newspaper, and to the applause of his fellow slaves, Ben reads aloud the momentous news of Mr. Lincoln's Emancipation Proclamation - surely one of the most remarkable readings of that document ever.

Based on the true story of Benjamin Holmes, Pat Sherman's stirring text and the memorable illustrations of Coretta Scott King medalist Floyd Cooper pay tribute to the power of freedom - and to the power of the written word.

▼▲
A self-taught young slave astonishes his fellow prisoners by reading aloud the newspaper account of Lincoln’s new emancipation proclamation. Based on actual events.

▼▲
I'm the author/artist and I want to review Ben and the Emancipation Proclamation.
Back
Back