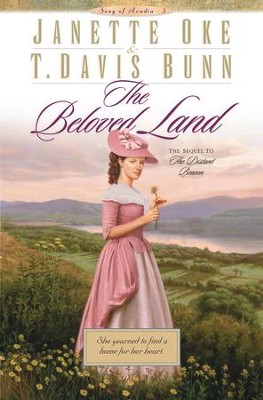 ▼▲
She Yearned to Find a Home for Her Heart

The tragic Acadian saga recounted in The Meeting Place, when the British drove the French from Nova Scotia, has followed two families over a score of years to the birth pangs of a new nation. The Song of Acadia has been one full of pathos but also of hope. Faith in God and family eventually have brought the Henri Robichauds to Louisiana, and finally, to a life of tranquility among the bayous. Back in Nova Scotia, the Andrew Harrows have been beacons of light among the British and the French communities.

But the American Revolution has created turmoil on two continents, dividing nations, people, and, sometimes, even families. Anne in England and Nicole in the New World have little hope of seeing one another again in the foreseeable future.

Then a letter finds its way to both sisters with news that send them on a frantic and harrowing journey to...The Beloved Land.

Janette receives fan mail from all over the world and answers each letter personally. She received the 1992 President's Award from the Evangelical Christian Publishers Association for her significant contribution to Christian fiction, the 1999 CBA Life Impact Award and has been awarded the Gold Medallion Award for fiction.

Janette and her husband, Edward, have four grown children and enjoy their many grandchildren. They make their home in Canada.

▼▲
I'm the author/artist and I want to review Beloved Land, The - eBook.
Back
Back