Skip to main content
You Are the Beloved: Daily Meditations for Spiritual Living
By: Henri J.M. Nouwen
Stock No: WW906378 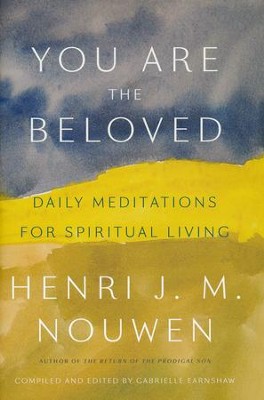 You Are the Beloved: Daily Meditations for Spiritual Living

▼▲
Spend 365 days with Nouwen! The central moment in Jesus' public ministry was when he was baptized in the Jordan and heard the affirmation, "You are my beloved Son, on whom my favor rests." Afterward, Nouwen believed, Jesus' "whole life was continually claiming that identity in the midst of everything." 400 pages, hardcover.

▼▲
Seven million copies of his books in print! This daily devotional from the bestselling author of such spiritual classics as The Return of the Prodigal Son and The Wounded Healer offers deep insights into human experience, intimacy, brokenness, and mercy.

"Henri Nouwen’s timeless and loving words are quiet prayers that will forever live in my heart."—Bren&eacute; Brown, New York Times bestselling author of Braving the Wilderness

Dutch-born Catholic priest and beloved author Henri J. Nouwen devoted much of his later ministry to emphasizing the singular concept of our identity as the Beloved of God. In an interview, he said that he believed the central moment in Jesus’s public ministry to be his baptism in the Jordan, when Jesus heard the affirmation, "You are my beloved son on whom my favor rests." "That is the core experience of Jesus," Nouwen writes. "He is reminded in a deep, deep way of who he is. . . . I think his whole life is continually claiming that identity in the midst of everything."

You Are the Beloved is a daily devotional intended to empower readers to claim this truth in their own lives. Featuring the best of Nouwen’s writing from previously published works, this devotional propels the canon forward as it draws on this rich literature in new and compelling ways. It will appeal to readers already familiar with Nouwen’s work as well as new readers looking for a devotional to guide them into a deeper awareness of their identity in Jesus.

▼▲
Henri J. M. Nouwen was a Dutch-born Catholic priest, professor, and pastor, who gained international renown as the author of more than thirty books on the spiritual life, including such classics as The Wounded Healer, The Inner Voice of Love, and The Return of the Prodigal Son. Nouwen’s books have been translated into more than thirty languages and have sold upwards of seven million copies worldwide, resonating with people across the religious, spiritual, cultural, and political spectrum. Since his death in 1996, ever increasing numbers of readers, writers, teachers, and seekers have been guided by his literary legacy.

▼▲
I'm the author/artist and I want to review You Are the Beloved: Daily Meditations for Spiritual Living.
Back
Back