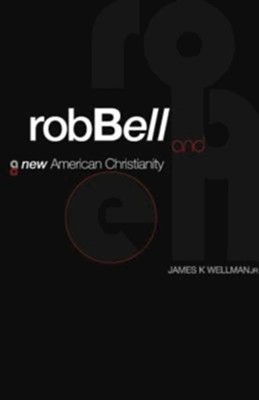 ▼▲
The Christian message needs a new interpreter: one that is particular enough to know and interpret the tradition but broad enough to evoke thought and feeling from broader groups of people, including evangelicals, liberals, and those who are disenchanted with churched religion and who describe themselves as spiritual but not religious, yet are fond of the Jesus tradition.

This book helps readers to understand the new landscape and its key figure, Rob Bell, by bringing a reasoned voice to the conversation and shedding light on the story, directions, and emotional power of the figure who Andy Crouch claims will be the main influence on Christians in this generation.

While his theology is seen as a theo-political stage by church leaders, when Rob Bell tours and speaks, it is the unchurched, the people in the pew, the people who want to be in the pew, who are listening—by the thousands. His recent placement on the cover of Time magazine sealed his import on the American landscape for anyone interested in religion.

Jonathan Nathan, a bookbuyer for the Harvard COOP, the largest booksellers in New England with a significant religion section says that no book has ever sold like Rob Bell’s to an audience that is young, thoughtful, and college-educated. Bell’s church has 10k members, and his influence has affected every sector of the American protestant church.

Why? Because Rob Bell has caused the whole evangelical world to rethink the scope of SALVATION with one single question: who gets to be saved? With that short sentence Bell has initiated a whole new movement in rethinking what it means to be an evangelical. A movement that has only begun.

Not only are heaven and hell at stake, but salvation itself. Is it meant for all or for only a small elect group—and if so, who gets to decide the parameters of that small group? If heaven and hell are not ultimate identifiers for a life of faith, can the passion to evangelize be maintained? If salvation is not either/or, but both/and, does the whole idea of world evangelism simply disappear?

Rob Bell has created another question for Evangelicals: Will you decide to live in a closed world of your own making or an open world? Those most influenced by Rob Bell are younger Evangelicals who are dying to open up their worlds. Rob Bell just gave them permission. According to Andy Crouch, his is the voice that will most influence this current generation.

For Liberals, Rob Bell gives them reason to be passionate about their faith and to think in big terms about it without giving up their minds and their questions. For the conservatives, he’s the voice that young Christians are looking to and admiring, and even if they disagree, they are trying to observe and imitate his approach and appeal.

Rob Bell doesn’t have the personality to sink into some religious subculture: He is a new super religious brand, the Apple or Pixar of his generation.

As an authorized biography, that will allow for extensive interviews with Bell and his some of his congregants. This will include interviews with outside informed supporters and those that reject him and his theology.

The book will reveal what makes him “tick,” how his Wheaton College background affected his work, and how he is dealing with accusations of being on the border of evangelical heresy.

This book will be researched and written over the next two month, with a finish date of December 1. Half or more will be available by the fall AAR/SBL annual meeting, with the plan to have Rob Bell and the author presenting.

The book will show how is he challenging orthodoxy and why theologians are upset. It will outline the key players in the debate. It will also argue that no matter what the theologians say, people are still attending Bell’s church, listening to him speak. This is in large part because the man has a pastor’s heart. He cares about his people. The theologians aren’t reclaiming the conversation; they are making themselves irrelevant as the people who want genuine faith and are coming to Rob Bell’s books and talks because, as Bell said, “when the woman coming to church tells me she has stopped cutting herself and that a life of faith makes a difference”--that’s where the real things are happening.

Finally, people like him, he is a charismatic speaker that young people are listening to: He has something to say, and he is pastorally living the heart of what he is saying.

▼▲
James K. Wellman, Jr. is Associate Professor and Chair of the Comparative Religion at the Jackson School of International Studies. His areas of expertise are in American religious congregations, culture, history, and politics. He has published an award-winning book, The Gold Church and the Ghetto: Christ and Culture in Mainline Protestantism (Illinois 1999). He has published two edited volumes: The Power of Religious Publics: Staking Claims in American Society (Praegers 1999), and Belief and Bloodshed: Religion and Violence Across Time and Tradition (Rowman and Littlefield, 2007). His most recent book is Evangelical vs. Liberal: The Clash of Christian Cultures in the Pacific Northwest, published by Oxford University Press. The book received Honorable Mention for the 2009 Distinguished Book Award by the Society for the Scientific Study of Religion (second out of twenty-six books nominated). He is also the project director of a $300,000 grant from the Luce Foundation which will soon culm

▼▲
I'm the author/artist and I want to review Rob Bell and a New American Christianity - eBook.
Back
Back