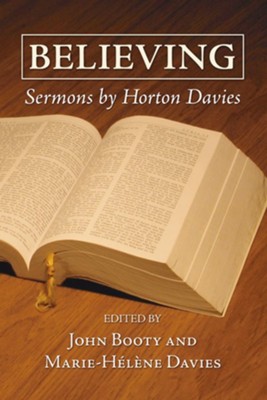 ▼▲
This volume of sermons is organized according to the Apostles' Creed, which expresses Davies's own solid faith as a Christian believer. But the sermons themselves apply to a variety of situations from history, psychology, and lore. Davies uses the intellect to touch and console the heart.

▼▲
Horton Davies first held a parish in Wallingford, London, during World War II. Later, during some summers in America, he also had interim pastorates at Brookfield, Connecticut, and at Tunbridge, Vermont. He held appointments successively at Rhodes University, South Africa; Oxford University; Princeton University; Princeton Theological Seminary; and Drew University. He is the author of, among other books, Worship and Theology in England; Varieties of English Preaching, 1900-1960; and Like Angels from a Cloud: The English Metaphysical Preachers, 1588-1645.

▼▲
I'm the author/artist and I want to review Believing: Sermons by Horton Davies - eBook.
Back
Back