Skip to main content
CYBER WEEK SALE! Spot great deals up to 88% off. >
The Believing Scientist: Essays on Science and Religion
By: Stephen Barr
Stock No: WW873706 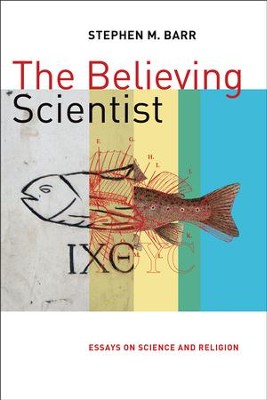 The Believing Scientist: Essays on Science and Religion

In The Believing Scientist, accomplished theoretical physicist and a faithful Catholic Steven Barr presents elegant writings by a cutting-edge research scientist defending traditional theological and philosophical positions. He addresses a wide range of questions about the relationship between science and religion, providing a beautiful picture of how they can coexist in harmony.

Barr not only analyzes such topics as the quantum creation of universes from nothing, the multiverse, the Intelligent Design movement, and the implications of neuroscience for the reality of the soul, but also challenges the widely held belief that there is an inherent conflict between science and religion. Including reviews of highly influential books by such figures as Edward O. Wilson, Richard Dawkins, Stephen Jay Gould, Francis S. Collins, Michael Behe, and Thomas Nagel, The Believing Scientist helpfully engages pressing questions that often vex religious believers who wish to engage with the world of science.

▼▲
Stephen M. Barr is professor of theoretical particle physics at the University of Delaware, a fellow of the American Physical Society, and a member of the Academy of Catholic Theology. He is also the author of Modern Physics and Ancient Faith.

▼▲
Donald Cardinal Wuerl
— Archbishop of Washington
"These thoughtful and thought-provoking essays are a rich demonstration of both scientific expertise and religious conviction."

George Weigel
— Ethics and Public Policy Center
"Stephen Barr's work, well grounded in real science and informed by deep faith, is a bracing antidote to the bluster of the New Atheists and a major contribution to the renewal of Western culture."

David Novak
— University of Toronto
"In this book Stephen Barr beautifully demonstrates how his work as a scientist and his life as a religious believer enrich one another, because both are different yet complementary approaches to the same universal reality created by God."

Stephen C. Meredith
— University of Chicago
"These essays are a must-read for anyone who has wondered why we couldn't or shouldn't have both science and religion in our lives."

John C. Cavadini
— University of Notre Dame
"Barr has given us a treasure trove in this collection of essays, full of his characteristic brilliance and his trademark ability to make complex ideas accessible to nonspecialists. This book will prove its value for years to come, both inside the classroom and out."

Jonathan Lunine
— Cornell University
"A compelling case that science and religion are not in conflict in a truly rational worldview. Barr provides his readers with an expert's tour of the most profound implications of modern physics."

▼▲
I'm the author/artist and I want to review The Believing Scientist: Essays on Science and Religion.
Back
Back