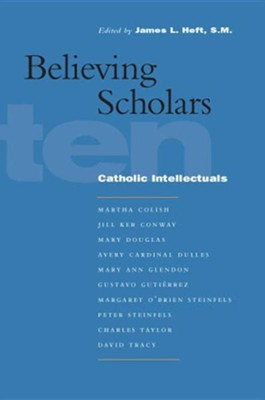 ▼▲
How do Catholic intellectuals draw on faith in their work? And how does their work as scholars influence their lives as people of faith?For more than a generation, the University of Dayton has invited a prominent Catholic intellectual to present the annual Marianist Award Lecture on the
general theme of the encounter of faith and profession. Over the years, the lectures have become central to the Catholic conversation about church, culture, and society.In this book, ten leading figures explore the connections in their own lives between the private realms of faith and their public
calling as teachers, scholars, and intellectuals.This last decade of Marianist Lectures brings together theologians and philosophers, historians, anthropologists, academic scholars, and lay intellectuals and critics.Here are Avery Cardinal Dulles, S.J., on the tensions between faith and theology in
his career; Jill Ker Conway on the spiritual dimensions of memory and personal narrative; Mary Ann Glendon on the roots of human rights in Catholic social teaching; Mary Douglas on the fruitful dialogue between religion and anthropology in her own life; Peter Steinfels on what it really means to be
a liberal Catholic; and Margaret O'Brien Steinfels on the complicated history of women in today's church. From Charles Taylor and David Tracy on the fractured relationship between Catholicism and modernity to Gustavo Gutirrez on the enduring call of the poor and Marcia Colish on the historic links
between the church and intellectual freedom, these essays track a decade of provocative, illuminating, and essential thought. James L. Heft, S.M., is President and Founding Director of the Institute for Advanced Catholic Studies and University Professor of Faith and Culture and Chancellor,
University of Dayton. He has edited Beyond Violence: Religious Sources for Social Transformation in Judaism, Christianity, and Islam (Fordham).

▼▲
James L. Heft, S.M., is President and Founding Director of the Institute for Advanced Catholic Studies and University Professor of Faith and Culture and Chancellor, University of Dayton. He edited Believing Scholars: Ten Catholic Intellectuals and Beyond Violence: Religious Sources for Social
Transformation in Judaism, Christianity, and Islam for Fordham.

▼▲
I'm the author/artist and I want to review Believing Scholars: Ten Catholic Intellectuals.
Back