Skip to main content
SPRING CYBER EVENT STARTS NOW: And it's a really BIG deal! Up to 88% off through 5/24>
Believing Again: Doubt and Faith in a Secular Age
By: Roger Lundin
Stock No: WW830777 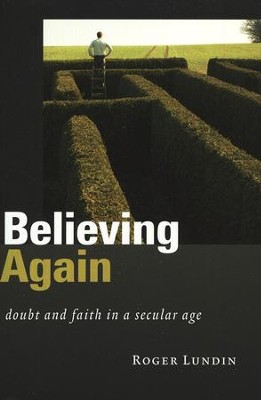 Believing Again: Doubt and Faith in a Secular Age

▼▲
* In the Enlightenment's wake, atheism became an intellectually and socially acceptable option in the 19th century. Ranging across disciplines, Lundin explores the works of literary thinkers---including Emily Dickinson, Fyodor Dostoevsky, and Karl Barth---to show how the modern mind stood poised between faith and skepticism, and how it challenged unbelief with creative brilliance. 320 pages, softcover from Eerdmans.

Lundin’s narrative focuses on key poets and novelists from the past two centuries — Dostoevsky, Dickinson, Melville, Auden, and more — showing how they portray the modern mind in tension between faith and doubt. Lundin engages these literary luminaries through chapters on a series of vital subjects, from history and interpretation to beauty and memory. Such theologians as Barth and Balthasar also enter the discussion, facing the challenge of modern unbelief with a creative brilliance that has gone largely unnoticed outside the world of faith. Lundin’s Believing Again is a beautifully written, erudite examination of the drama and dynamics of belief in the modern world.

▼▲
Roger Lundin is Arthur F. Holmes Professor of Faith andLearning at Wheaton College, Illinois. His other booksinclude From Nature to Experience: The AmericanSearch for Cultural Authority.

▼▲
Roger Lundin is the Blanchard Professor of English at Wheaton College. His other books include Invisible Conversations: Religion in the Literature of America, There Before Us: Religion, Literature, and Culture from Emerson to Wendell Berry, and Emily Dickinson and the Art of Belief.

▼▲
Believing Againis a study of the intellectual and cultural consequences of the nineteenth-century emergence of open unbelief as an intellectually viable and socially acceptable option.

In examining the drama and dynamics of belief in the modern world, Roger Lundin focuses on the works of key poets and novelists of the past 200 years. Here, such authors as Emily Dickinson, Fyodor Dostoevsky, and W. H. Auden show the modern mind and heart learning to poise themselves between belief and unbelief. Theologians also vigorously enter the fray in this conversation. Lundin doesnt just rest on the resounding voices of the past, though they are ably represented here by such figures as Paul, Augustine, and Martin Luther. He shows how stalwart thinkers of the past century  Barth, Balthasar, and others  have faced the challenge of modern unbelief with a creative brilliance that has gone largely unnoticed outside the world of faith. Believing Again brings these voices into the larger cultural conversation.

In chapters dealing with a series of vital subjects from history and interpretation to beauty and memory, this book ranges across disciplines in its effort to comprehend the many changes that made unbelief possible and to examine the myriad implications of its enduring presence in modern experience.

▼▲
David Martin
-- London School of Economics
"Remarkable. . . . A masterly exploration of the belief-unbelief debate in modern times, this book clearly and elegantly brings out what the main contributors -- poets, philosophers, and theologians -- have to say. There is no more appropriate companion to Charles Taylor’s magisterial A Secular Age."

Kevin J. Vanhoozer
-- Trinity Evangelical Divinity School
"This book reminds us that the iniquities and inquiries alike of the (nineteenth-century) fathers have been visited on the children of modernity. We are all products, conscious or not, of a powerful cultural sea change that has made belief in God difficult and supernaturalism hard to imagine. Roger Lundin features poets, novelists, and theologians who not only express this difficulty but chart a way through it. This is not a book for specialists, however, but for all wide-awake Christians who have wondered how we came to be where we are and what we can do to renew the sea of faith at a time of its low Western tide."

-- The Times Literary Supplement
"Roger Lundin's Believing Again: Doubt and Faith in a Secular Age scrutinizes the sources of modern disbelief through the lens provided by literary figures from Dostoevsky to Auden, and theologians like Barth and Balthasar. It provides a major complement to Charles Taylor's A Secular Age."

▼▲
I'm the author/artist and I want to review Believing Again: Doubt and Faith in a Secular Age.
Back
Back