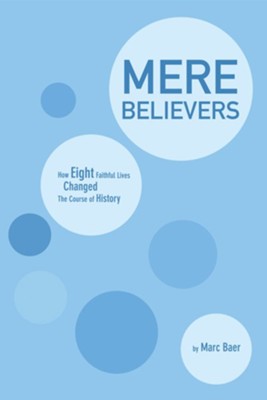 ▼▲
Does God use flawed people despite their shortcomings? Mere Believers tells the stories of eight remarkable men and women living in tumultuous times, revealing surprising and inspirational answers. William Wilberforce defined Christian as "a pilgrim travelling on business through a strange country." In Mere Believers, historian Marc Baer examines eight Christian figures from the past, indicating how their conversion not only directed them to new vocations ("travelling on business"), but also impacted in profoundly positive ways the society and culture of that "strange country" they called home. The book reveals how faithful lives can have revolutionary consequences, offering poignant models for vocational discernment and spiritual formation. Mere Believers helps readers engage our own times better by bringing them into conversation with courageous Christians of the past. The subjects represent a variety of Christian traditions. They are male and female, black and white, English, Welsh, Scottish, and an African immigrant. Mere Believers reveals how what we believe is the legacy of what they achieved, that some of the best minds and hearts in the past have been committed, culturally wise Christians, and in turn how their lives and worldviews have shaped our own--including, paradoxically, those who reject Christianity.

▼▲
Marc Baer is Professor and Chair of the Department of History, Hope College, Holland, Michigan. For the past four decades his research has focused on modern British cultural, social, and political history. He is the author of two books: Theatre and Disorder in Late Georgian London (1992) and The Rise and Fall of Radical Westminster, 1780-1890 (2012).

▼▲
I'm the author/artist and I want to review Mere Believers: How Eight Faithful Lives Changed the Course of History - eBook.
Back
Back