Skip to main content
SPRING CYBER EVENT STARTS NOW: And it's a really BIG deal! Up to 88% off through 5/24>
Believer's Authority
By: Happy Caldwell
Stock No: WW742770 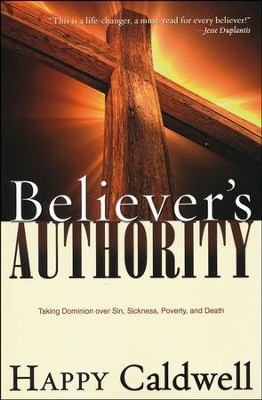 From the beginning of creation to the ministry of Jesus and throughout the church age, there is no message more revolutionary, life-changing, or misunderstood than that of the believer's authority on the earth. Pastor Happy Caldwell reveals how every believer can use his or her own kingdom authority to release God's healing power, set captives free from Satan's snares, overcome spirits of fear, depression, and poverty, and much more. The spiritual battle is real, but through these powerful, time-tested, scriptural principles, you can be a victor instead of a victim!

▼▲
Jesus Gave You the Keys to His Kingdom!From the beginning of creation to the ministry of Jesus and throughout the church age, there is no message more revolutionary, life-changing, or misunderstood than that of the believer's authority on the earth. Pastor Happy Caldwell reveals how every believer can use their own kingdom authority to...Release God's healing powerSet captives free from Satan's snares*Overcome the spirits of fear, depression, and poverty*Perform miracles in Jesus' mighty nameThe spiritual battle is real, but through these powerful, time-tested, scriptural principles, you can be a victor instead of a victim!

▼▲
In 1979, God spoke to Happy Caldwell to build a spiritual production center in Little Rock, Arkansas, in order to take the good news of Jesus Christ to the city, state, nation, and world. Happy and his wife, Jeanne, founded Agape Church, a strong, spirit-filled body of believers. Through his deep sensitivity to the Spirit of God and his anointed teaching, the lost are being saved, the sick are being healed, and thousands are being blessed.In 1988, Happy and Jeanne answered a direct call from the Lord to take His message beyond Central Arkansas. They founded VTAnd#151;the Victory Television Network. This network of three full-power TV stations is carried on over 200 cable systems and is bringing the gospel into more than 1.2 million households. Through his own daily program, Arkansas Alive, Happy presents the Word in profound simplicity, making the character of God a revelation to those who hear.Also desiring to see spiritual excellence in education, the ministry of Agape has grown to include Agape Academy and Agape College, which offers both diploma and degree programs. Happy's ministry is known for instilling Christian principles in strategic leadership. He was honored for this in 2005 with an invitation to participate in the US Army War College Strategic Leader Staff Ride at Gettysburg, Pennsylvania.He is a recipient of the Peter J. Daniels Caleb Encourager Award, which has been bestowed upon such notable people as Norman Vincent Peale, Nelson Mandela, and Dr. Oral Roberts. He has also been recognized by the Arkansas Martin Luther King Jr. Commission with The Salute to Greatness Community Service Award.Happy Caldwell continues to travel worldwide delivering the life-changing message of Jesus Christ. He has recorded several albums with Jeanne and has written several books, including Saving Our Cities, An Expected End, and How to Thrive in Perilous Times.

▼▲
I'm the author/artist and I want to review Believer's Authority.
Back
Back