Skip to main content
The Will To Believe: Woodrow Wilson, World War I, and America's Strategy for Peace and Security - eBook
By: Ross Kennedy
Stock No: WW34689EB 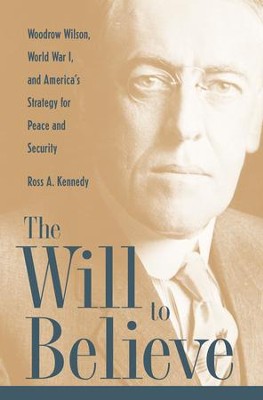 The Will To Believe: Woodrow Wilson, World War I, and America's Strategy for Peace and Security - eBook

“By addressing all sides of the American debate on national security questions, and by showing both the complexity and the nuance that characterized that debate, The Will to Believe fills a major gap in the literature on both World War I and all things ‘Wilsonian.’”
—Mary Ann Heiss, series editor, New Studies in U.S. Foreign Relations Series

In many ways, Woodrow Wilson and the era of World War I cast a deeper shadow over contemporary foreign policy debates than more recent events, such as the Cold War. More so than after World War II, Wilson and his contemporaries engaged in a wide-ranging debate about the fundamental character of American national security in the modern world. The Will to Believe is the first book that examines that debate in full, offering a detailed analysis of how U.S. political leaders and opinion makers conceptualized and pursued national security from 1914 to 1920.

Based on extensive research gleaned from public documents, presidential papers, and periodicals, The Will to Believe departs significantly from existing scholarship, which tends to examine only Wilson or his critics. This is the first study of America’s approach to the war, which examines all major U.S. perspectives from across the political spectrum and analyzes Wilson’s security strategy from the beginning of U.S. neutrality through the end of his presidency. During World War I there was no consensus among Wilson and his contemporaries on such fundamental issues as the nature of the international system, the impact of security policies on domestic freedom, the value of alliances and multinational organizations, and the relationship between democracy and peace. Historian Ross A. Kennedy focuses on how three competing groups—pacifists, liberal internationalists, and Atlanticists—addressed these and other national security issues.

▼▲
Ross A. Kennedy received his Ph.D. in history from the University of California at Berkeley. He has taught at the Johns Hopkins University–Nanjing University Center for Chinese and American Studies and is currently associate professor of history at Illinois State University. He lives in Bloomington, Illinois, with his wife and two daughters.

▼▲
I'm the author/artist and I want to review The Will To Believe: Woodrow Wilson, World War I, and America's Strategy for Peace and Security - eBook.
Back
Back