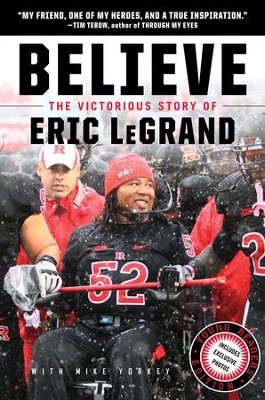 ▼▲
Believe is the profoundly moving story of Eric LeGrand, the former defensive tackle for the Rutgers University Scarlet Knights football team, who suffered a severe spinal cord injury and was left paralyzed by a crushing on-field tackle during a heated game with Army. A remarkable true account of a courageous young athlete whose unshakable faith, spirit, positive outlook, and rousing motto, “BELIEVE!” would serve as inspiration to legions of fans—and as motivation in his own quest to walk again—Eric’s story has received national attention, heavily covered by ESPN and Sports Illustrated. It will lift the hearts of every reader, not least of all those who were affected by quarterback Tim Tebow’s bestselling memoir, Through My Eyes.

Eric LeGrand is a student at Rutgers University and a former defensive lineman and special teams player for the Scarlet Knights. Eric is an honorary member of the Tampa Bay Buccaneers, and he has received the Jimmy V Perseverance Award during ESPN's annual ESPY awards show.

Mike Yorkey is a veteran writer with more than seventy books under his belt, including the Playing with Purpose and Every Man's Battle series.

▼▲
When Rutgers junior Eric LeGrand collapsed on the field in October 2010 after a tackle gone wrong, his football career, along with his ability to walk and care for himself, disappeared. Paralyzed from the neck down, LeGrand had to depend fully on nurses and his mother, whose devotion helps form the heart of this wrenching yet uplifting story. Adapted from an adult memoir, published simultaneously, the book's tight structure builds tension, with LeGrand's narrative shifting between life before and after the accident. He starkly details the physical and emotional effects of becoming paralyzed (for example, feeling brutally cold even in midsummer and the agony of not being able to scratch his nose). Despite the reverberations of the accident, the moment of the tragedy isn't the climax of the storyrather, it's LeGrand's decision to move forward with courage. LeGrand's faith and optimism power through even the darkest details of his slow recovery, yet he still honestly explores what the accident has cost him. The author's ability to reexamine and reinvent himself despite a debilitating setback may motivate readers to seize their own ambitions. Ages 812. (Oct.) 2012 Reed Business Information

▼▲
I'm the author/artist and I want to review Believe: The Victorious Story of Eric LeGrand (Young Readers' Edition) - eBook.
Back
Back