Skip to main content
SPRING CYBER EVENT STARTS NOW: And it's a really BIG deal! Up to 88% off through 5/24>
Believe You Can, repackaged ed.: The Power of a Positive Attitude
By: John Mason
Stock No: WW739093 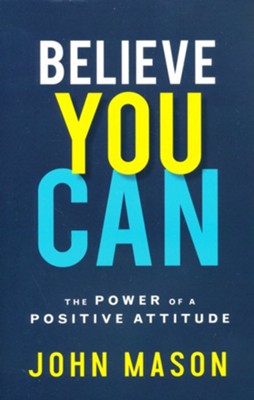 Believe You Can, repackaged ed.: The Power of a Positive Attitude

▼▲
You were created to live a unique and unlimited life. No one else is you, and no one else could be you. So what holds you back from being all that God meant you to be? It's buying into the lie that you can't, won't, or shouldn't achieve your dreams.

Believe You Can calls you to embrace a positive attitude so that you can reach your potential. Every page is filled with encouraging, challenging, and motivating nuggets of truth that show you that success in life is not an accident--but it's not just dumb luck either. Ready to achieve positive results in your life? Believe you can!

▼▲
John Mason is a national bestselling author, noted speaker, and executive author coach. He is the founder and president of Insight International, an organization dedicated to helping people reach their God-given dreams and fulfill their destinies. He's authored twenty-eight books, including Believe You Can, An Enemy Called Average, You're Born an Original--Don't Die a Copy, and Know Your Limits--Then Ignore Them. His books have sold over two million copies and are translated into thirty-eight languages throughout the world. John's books are widely known as a source of godly wisdom, genuine motivation, and practical principles. Known for his quick wit, powerful thoughts, and insightful ideas, he's a popular speaker across the United States and around the world.

▼▲
I'm the author/artist and I want to review Believe You Can, repackaged ed.: The Power of a Positive Attitude.
Back
Back