Skip to main content
To Believe or Not Believe, That Is the Question
By: Thomas J. Gorman
Stock No: WW349881 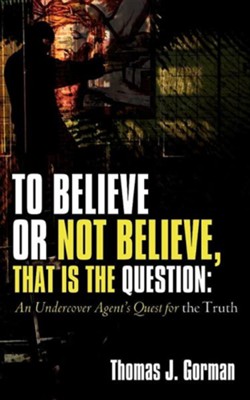 To Believe or Not Believe, That Is the Question

▼▲
Hesitant to share the Lord with family and friends? Give them this easy to read and practical book. It's the story of an agnostic cop who investigated Christianity and became a believer. The author's life reads like a Hollywood movie. He was a boy scout turned juvenile delinquent. His many jobs included being a "carnie" and professional boxer. Eventually he became a California undercover agent. His exciting career included over 1,000 undercover operations. He was shot and stabbed on the job and had a $25,000 contact placed on his life. He retired as the Deputy Chief of the California Bureau of Narcotic Enforcement. His spiritual life paralleled his secular life. He started as a devout Catholic alter boy but at thirteen became an agnostic. He remained a non-believer for 26 years until an investigation led him to the Lord. Forty-five years ago in Juarez, Mexico, he married his high school sweetheart, Denise. Their daughter, Terri is a California school principle and son, Tom Jr. is a DEA supervisor. Tom and Denise live happily in the Colorado Mountains with their Brittney, Taffy.

▼▲
I'm the author/artist and I want to review To Believe or Not Believe, That Is the Question.
Back