Skip to main content
SPRING CYBER EVENT STARTS NOW: And it's a really BIG deal! Up to 88% off through 5/24>
My Name is Tani...and I Believe in Miracles: The Amazing True Story of One Boy's Journey from Refugee
Narrated By: Ronnie Butler, Rhett Price
By: Tanitoluwa Adewumi, Kayode Adewumi, Oluwatoyin Adewumi, Craig Borlase
Stock No: WW732573 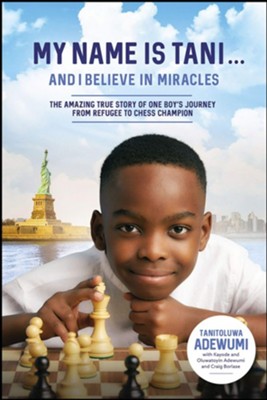 My Name is Tani...and I Believe in Miracles: The Amazing True Story of One Boy's Journey from Refugee

Tani and his family’s story begins amid Boko Haram’s reign of terror in their native country of Nigeria as they become targets for capture and killing. Their miraculous escape takes them to a New York City homeless shelter, where they wait to be granted religious asylum.

Tani’s father, who comes from a royal family and has left behind thirteen employees in Nigeria, becomes a dishwasher and Uber driver to support his family. Tani’s mother, whose family helps to oversee the finances for a large Nigerian printing press, worked at a bank for more than eight years but is now training to become a home health aide.

After eighteen months the family is still at the shelter, unbeknownst to Tani’s classmates. When Tani asks his parents if he can join the chess program at his New York City public school, it seems unlikely since a fee is required. So his mother writes to the coach, who offers Tani a scholarship. Tani jumps in to learn the game. The result is not only a miracle in a chess competition but also the rescue and redemption of an entire family.

As miracles led Tani and his family to New York, his father, Kayode Adewumi, says, “There are many times in my life when I thought this must be the miracle, and yet I did not know that the miracle had not yet begun.”

▼▲
I'm the author/artist and I want to review My Name is Tani...and I Believe in Miracles: The Amazing True Story of One Boy's Journey from Refugee.
Back