Skip to main content
Can You Believe It's True?: Christian Apologetics in a Modern and Postmodern Era - eBook
By: John S. Feinberg
Stock No: WW42153EB 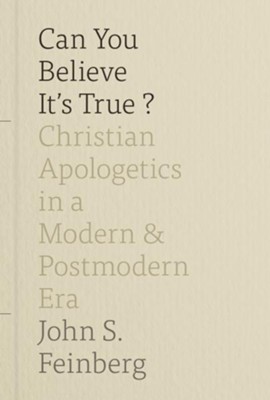 Can You Believe It's True?: Christian Apologetics in a Modern and Postmodern Era - eBook

▼▲
<p>Truth?</p> <p>Can we know it? Many people today would say no&–we can&’t. This paradigmatic shift to relativism presents a direct challenge to the Christian&’s witness and the challenge must be answered.</p> <p>In this timely new resource, noted scholar John Feinberg argues that truth is both real and knowable, offering us a robust guide to Christian apologetics for engagement with our world today.</p>

John S. Feinberg (PhD, University of Chicago) is department chair and professor of biblical and systematic theology at Trinity Evangelical Divinity School. He is the author of Ethics for a Brave New World (with Paul D. Feinberg) and is general editor of Crossway’s Foundations of Evangelical Theology series.

▼▲
Many Christians are unprepared to answer the postmodern notion that truth is unknowable and hence ultimately unimportant. That premise refutes itself, of course, but for those already steeped in existential and postmodern ways of thinking, self-defeating propositions are standard fare, and even the simplest truths can seem elusive. Persuading those who love darkness and revel in contradiction can be quite a challenge. Dr. John Feinberg is uniquely qualified to untangle the knots of modern and postmodern thought, pointing us to a better way of understanding truth in the clear light of Scripture. This is an extremely helpful study.
-John MacArthur,
Pastor, Grace Community Church, Sun Valley, California

John Feinberg meets the challenge of modern skepticism head on, with the full confidence that Christianity is rational and defensible in the marketplace of ideas. Your mind will be stretched and your faith strengthened when you read this book.
-Erwin W. Lutzer,
Senior Pastor, The Moody Church, Chicago, IL

Dr. Feinberg, a well-respected philosopher and theologian, has written a rigorous and learned work. The first two sections give a careful prolegomena to apologetics, emphasizing epistemology and apologetic methodsubjects that are all too often ignored or glossed over in works on apologetics. He then applies his apologetic method to some of the most important questions in apologetics. The attentive reader will be richly rewarded.
-Douglas Groothius,
Professor of Philosophy, Denver Seminary; author, Christian Apologetics

John Feinbergs book is an insightful, thoughtful, and thorough analysis of the modern and postmodern mindsets and a guide on how to engage them. In addition to astute treatments of traditional apologetical themes, such as the Gospels reliability and religious pluralism, this volume incisively engages skepticism, truth, and knowledge quite unlike the standard texts in apologetics. Carefully-argued, yet quite readable, Feinbergs book has much to offer the expert, the novice, and those in between.
-Paul Copan,
Pledger Family Chair of Philosophy and Ethics, Palm Beach Atlantic University; author, Loving Wisdom: Christian Philosophy of Religion

John Feinberg is one of todays most accomplished Christian scholars. Having written on ethics, the doctrine of God, and the problem of evil, he here turns his attention to apologetics in a modern and postmodern world. Can You Believe Its True? manages to make a large and complex body of material accessible. In Feinbergs rendering, truth is neither irrational nor strictly modern (foundational), but biblical. Both theoretically solid and ultimately practical, this book will contribute enormously to showing how Christian faith is reasonable, credible, and pertinent to our confused world.
-William Edgar,
Professor of Apologetics, Westminster Theological Seminary, Philadelphia

John Feinberg is one of the most perceptive Christian thinkers of our time. In Can You Believe Its True? he affords an accessible and helpful guide for pastors, ministerial students, and laypersons about how to articulate the truth of Christianity effectively in our postmodern era.
-Steve Lemke,
Provost and Professor of Philosophy and Ethics, New Orleans Baptist Theological Seminary

Having provided detailed analyses and assessments of modernist and postmodernist assumptions, Professor Feinberg offers a sympathetic critique of Reformed Epistemology (Plantinga) and presuppositionalism (Van Til), noting virtues and limitations. He follows this with a presentation and defense of his own evidentialism, including sample applications. This is a major contribution to current discussion as to the best approach to Christian apologetics.
-Keith E. Yandell,
Julius R. Weinberg Professor of Philosophy, Emeritus, University of Wisconsin Madison

This volume by John Feinberg presents a more extensive range of subjects than many apologetics textbooks. Beginning with truth and the modern-postmodern debate, Feinberg wades into waters that are explored too seldom in this context but that perhaps include the most gems. Other topics include a detailed investigation of apologetic methodologies, along with specific issues such as the problem of evil, the reliability of the New Testament text, Jesuss resurrection, and pluralism and tolerance. Each is discussed with understanding and insight. While this is the thorough treatment one would expect from Feinberg, its accessible and relaxed tone gives it a sense of a conversation throughout. I recommend this enjoyable text that can be used at more than one level, depending on the students needs.
-Gary R. Habermas,
Distinguished Research Professor, Liberty University and Theological Seminary

▼▲
I'm the author/artist and I want to review Can You Believe It's True?: Christian Apologetics in a Modern and Postmodern Era - eBook.
Back
Back