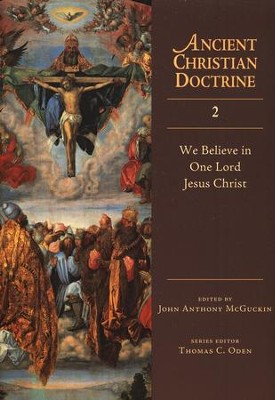 ▼▲
The Ancient Christian Doctrine series traces the traditional doctrinal confessions of the church as they are expressed in the Nicene Creed. This volume (2) follows the second phrase in the creed "We believe in One Lord Jesus Christ, the only Son of God eternally begotten of the Father, God from God, Light from Light, True God from true God, Begotten not made, of one being with the Father. Through him all things were made, for us, and for our salvation, he came down from Heaven. By the power of the Holy Spirit he became incarnate, from the Virgin Mary, and was made man. In following the creed, this book documents the major theological contributions made to the doctrines stated above in the early church. This series is an indispensable resource for anyone interested in learning more about the ways in which the early church formulated their theology.

"Who do you say that I am?" This question that Jesus asked of his disciples, so central to his mission, became equally central to the fledgling church. How would it respond to the Gnostics who answered by saying Jesus was less than fully human? How would it respond to the Arians who contended he was less than fully God? It was these challenges that ultimately provoked the Council of Nicaea in A.D. 325.

In this Ancient Christian Doctrine volume covering the first half of the article in the Nicene Creed on God the Son, John Anthony McGuckin shows how it countered these two errant poles by equally stressing Jesus' authentic humanity (that is, his fleshliness and real embodiment in space and time) and his spiritual glory or full divinity.

One cottage industry among some historical theologians, he notes, has been to live in a fever of conspiracy theory where orthodox oppressors dealt heavy-handedly with poor heretics. Or the picture is painted of ancient grassroots inclusivists being suppressed by establishment elites. The reality was far from such romantic notions. It was in fact the reverse.

The church who denounced these errors did so in the name of a greater inclusivity based on common sense and common education. The debate was conducted generations before Christian bishops could ever call on the assistance of secular power to enforce their views. Establishing the creeds was not a reactionary movement of censorship but rather one concerned with the deepest aspects of quality control.

Ultimately, what was and is at stake is not fussy dogmatism but the central gospel message of God's stooping "down in mercy to enter the life of his creatures and share their sorrows with them. He has lifted up the weak and the broken to himself, and he healed their pain by abolishing their alienation."

The five-volume Ancient Christian Doctrine series follows up on the acclaimed Ancient Christian Commentary on Scripture to provide patristic commentary on the Nicene Creed, translating source material from the church fathers into English for unparalleled insight into early church history.

▼▲
formerly reader in patristic and Byzantine theology at the University of Leeds in England, is currently Ane Marie and Bent Emil Nielsen Professor in Late Antique and Byzantine Christian History at Union Theological Seminary and professor of Byzantine Christian studies at Columbia University in New York City. A Fellow of both the Royal Society of Arts and the Royal Historical Society, he has written over twenty works of historical theology, including and formerly the Henry Anson Buttz Professor of Theology at The Theological School, Drew University, Madison, New Jersey, is the general editor of the Ancient Christian Commentary on Scripture. The author of numerous books, including a highly regarded three-volume systematic theology, he also serves as a general editor for Ancient Christian Texts and as director of the Center for Early African Christianity.

▼▲
I'm the author/artist and I want to review We Believe in One Lord Jesus Christ: Ancient Christian Doctrine Series [ACD].
Back
Back