Skip to main content
CUSTOMER APPRECIATION SALE: Thousands of starry deals through 6/22!
Free to Believe: The Battle Over Religious Liberty in America
By: Luke Goodrich
Stock No: WW652906 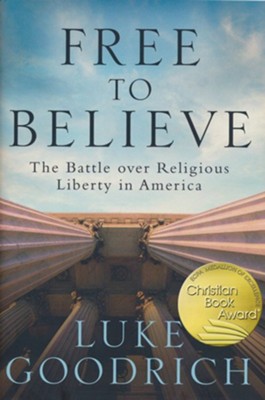 Free to Believe: The Battle Over Religious Liberty in America

▼▲
Will Christian beliefs soon be marginalized as a form of bigotry? Applying biblical understanding to today's most divisive issues, Goodrich offers a reasoned, balanced, and gospel-centered approach to religious freedom; explains why it matters; shows how it's threatened; and gives believers practical steps for responding to conflicts in an informed, responsible, and graceful way. 276 pages, hardcover from Multnomah.

▼▲
A leading religious freedom attorney, the veteran of several Supreme Court battles, helps people of faith understand religious liberty in our rapidly changing culture—why it matters, how it is threatened, and how to respond with confidence and grace.

WINNER OF THE CHRISTIAN BOOK AWARD® &bull; THE GOSPEL COALITION'S BEST BOOK OF THE YEAR, PUBLIC THEOLOGY & CURRENT EVENTS &bull; NAMED ONE OF THE BEST BOOKS OF THE YEAR BY WORLD MAGAZINE

Many Americans feel like their religious freedom is under attack. They see the culture changing around them, and they fear that their beliefs will soon be punished as a form of bigotry. Others think these fears are overblown and say Christians should stop complaining about imaginary persecution.

In Free to Believe leading religious freedom attorney Luke Goodrich challenges both sides of this debate, offering a fresh perspective on the most controversial religious freedom conflicts today. With penetrating insights on gay rights, abortion rights, Islam, and the public square, Goodrich argues that threats to religious freedom are real—but they might not be quite what you think.

As a lawyer at the Becket Fund for Religious Liberty, Goodrich has won several historic Supreme Court victories for clients such as the Little Sisters of the Poor and Hobby Lobby. Combining frontline experience with faithful attention to Scripture, Goodrich shows why religious freedom matters, how it is threatened, and how to protect it. The result is a groundbreaking book full of clear insight, practical wisdom, and refreshing hope for all people of faith.

▼▲
Luke Goodrich, religious freedom attorney at Becket, has won precedent-setting cases in courts across the country, including four cases in the Supreme Court. He appears frequently in the media to discuss religious freedom, including on Fox News, CNN, PBS, and in the New York Times, Los Angeles Times, and Washington Post. He teaches an advanced course in constitutional law at the University of Utah law school. Goodrich lives in Utah, where he enjoys exploring canyon country with his wife and seven children and serving as an elder in their local church.

▼▲
"Religious freedom is one of the most important civil rights issues of our time, and Luke Goodrich is at the forefront of the battle. If you want to understand religious freedom and how to protect it, you need this book."—Eric Metaxas, #1 New York Times best-selling author of Bonhoeffer, Martin Luther, and If You Can Keep It

"Religious liberty is too important to be just another culture war skirmish. If the soul is not free, every other freedom is in jeopardy. We live in a time when religious freedom is rarely discussed without either alarmism or dismissal. Luke Goodrich is one of the nation’s most respected thought leaders in the arena of liberty of conscience. In this book he reframes our context, connecting us with generations past and prognosticating on the challenges of the future. I hope many people, both religious and secular, will read this volume and recommit to a society where all consciences are free to believe, to worship, to serve, and to live."—Russell Moore, president of the Ethics and Religious Liberty Commission of the Southern Baptist Convention

"With the religious freedoms that Americans have long taken for granted now under fierce attack, Luke Goodrich not only sounds an alarm about the challenges ahead but also offers practical guidance on how to confront them. This wise, faith-filled, and eminently readable book should be in the hands of everyone who values religious liberty."—Mary Ann Glendon, Learned Hand Professor of Law at Harvard University and author of A World Made New

"Today more than ever, thoughtful citizens need a clear, credible, and intelligible text that makes the case for preserving the precious gift of religious liberty. In Free to Believe Luke Goodrich provides this much-needed narrative."—Most Reverend Joseph E. Kurtz, DD, archbishop of Louisville and former president of the United States Conference of Catholic Bishops

"The first time I heard Luke Goodrich speak about religious freedom, I realized he was inviting me into a conversation I had never had before. Luke’s teachings on religious freedom are based not on fear, tradition, or partisanship but on Jesus. He has opened my eyes, as a pastor, to the reality that religious liberty is not something invented by our US Constitution but is deeply embedded in the Bible, the gospel of Jesus, and the heart of God. Pastors, this book is a gift to us! It’s a remarkable tool that helps us reimagine for ourselves and our congregations what it means to respond to the religious liberty conversation through the lens of the gospel."—Kyle Costello, lead pastor of Mariners Church Huntington Beach

"As a journalist who writes about religious liberty issues, I often despair over how little Christians know about dire looming threats to our most fundamental freedom. Luke Goodrich’s book is the smart, plainspoken, biblically literate, and legally sound guide that churches, Christian schools, and business-owning believers desperately need to read as the conflicts between the faith and its enemies intensify. Buy this book and read it closely: the institution you save may be your own."—Rod Dreher, author of The Benedict Option

"Today religious liberty is more likely to be carelessly disregarded as a special interest than faithfully upheld as a fundamental human right. People who love freedom need compelling arguments to offer in response—the kind of arguments that Luke Goodrich makes in Free to Believe. In addition to offering biblical and theological reasons that all people (not just Christians) should have freedom of religious conscience, Goodrich uses his experience as a lawyer with a winning record before the Supreme Court to address the most challenging religious liberty issues that our culture faces today."—Philip Ryken, president of Wheaton College

"Free to Believe is a book for Christians struggling to understand biblical principles of freedom of religion—a freedom that extends to all faiths and even to unbelief. Authors who truly understand the principles of our First Amendment are rare, and those among them who know and love the Scripture are rarer still. Luke Goodrich, one of America’s top litigators in religious freedom cases and a devoted servant of Christ, is both, and his book offers insight, faith, passion, and above all clarity."—Michael McConnell, director of the Constitutional Law Center at Stanford Law School and former circuit judge on the United States Court of Appeals for the Tenth Circuit

"Religious freedom is the quintessential firewall against totalitarianism. In his new book Luke Goodrich equips us with this truth: freedom to believe stands as the facilitative womb from which all other freedoms flow. This book will not only inform you but also inspire you to stand as an advocate for religious freedom, not just for our generation but for generations to come."—Samuel Rodriguez, lead pastor of New Season, president of the National Hispanic Christian Leadership Conference, author of You Are Next, and executive producer of the movie Breakthrough

"Goodrich’s defense of religious liberty is compelling for four reasons: it’s comprehensive about today’s challenges to our First Amendment; it’s filled with both an unvarnished realism and hope grounded in deep faith; it’s shaped by the author’s keen legal intellect and rich experience with the law; and it’s wonderfully readable. The United States is a republic founded on the commonsense and fundamental rights of everyday citizens. This is a vitally important book for all of us who value those rights and the best ideals of our nation."—Most Reverend Charles J. Chaput, OFM Cap., archbishop of Philadelphia

"As a top attorney with Becket, our nation’s premier religious liberty appellate advocacy law firm, Luke Goodrich has been on the front lines in the battle to protect the rights of people of every faith and shade of belief. With the basic human—and constitutional—right to religious freedom under assault from many different quarters, it is a difficult and ongoing struggle. As Goodrich recounts in his marvelous new book, there have of late been some important and exciting victories in the Supreme Court and other federal and state tribunals. But enormous challenges lie ahead. In meeting these challenges, having an informed and engaged citizenry is critical. That’s why Free to Believe is such a blessing."—Robert P. George, McCormick Professor of Jurisprudence at Princeton University

"Should Christians defend the religious liberty of non-Christians? And if so, why and how? These are but some of the crucial questions on which Luke Goodrich focuses his formidable intellect in his important new book, Free to Believe. Goodrich brings to bear his experience as one of the country’s premier religious liberty litigators and his lifelong love of the Scriptures. The result is a book that no one, on any side of these questions, can ignore. And it’s a great read besides."—Kevin J. "Seamus" Hasson, founder and president emeritus of the Becket Fund for Religious Liberty and author of The Right to Be Wrong

"Goodrich—attorney at the Becket Fund for Religious Liberty who has argued and won multiple cases at the Supreme Court, including the 2014 case Burwell v. Hobby Lobby—explains the current state of religious liberty in his instructive debut. . . . Christian Supreme Court watchers will get the most out of Goodrich’s lucid exploration of American religious freedoms."—Publishers Weekly

▼▲
I'm the author/artist and I want to review Free to Believe: The Battle Over Religious Liberty in America.
Back
Back