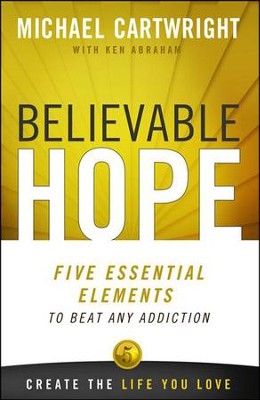 ▼▲
Millions of people appear to be living normal lives, yet they are secretly numbing their emotional pain with alcohol, drugs, food, and many other lifestyle addictions. The good news is that there is hope, and author Michael Cartwright know this firsthand, both personally and professionally. Addicted to drugs and alcohol as a teenager, he landed in a mental institution in a catatonic state. Using many of the methods he shares in this book, he transformed his life: becoming sober and successful and a respected pioneer in the recovery field.
This book offers a real source of hope that will save your life or the life of your loved one. Believable Hope is a proven methodology with a five-pronged approach that has helped tens of thousands of people over the years. With personal accounts and application principles that will help anyone put an end to addictive behavior, Michael Cartwright reveals why lasting change is usually more about mindset and emotions than clinical factors. This book is a lifeline for people battling addiction and provides a fresh sense of hope for those who love them.

▼▲
Ken Abraham has collaborated on thirteen New York Times bestsellers, including Let's Roll with Lisa Beamer, One Soldier's Story with Senator Bob Dole, Your Best Life Now with Joel Osteen, and Against All Odds with Chuck Norris. Ken has also written books with e Harmony founder, Dr. Neil Clark Warren (Falling in Love for All the Right Reasons); astronaut Buzz Aldrin (Magnificent Desolation); Super Bowl and NASCAR championship-winning coach Joe Gibbs (Racing to Win); and former boxing champion and enormously successful entrepreneur George Foreman (Knockout Entrepreneur). Michael Cartwright is a respected addiction industry trailblazer and a noted behavioral healthcare entrepreneur. Over his seventeen-year career, Michael has been instrumental in setting up addiction treatment centers across the United States which have served over 20,000 patients. He has been committed to research-based treatment and has directly supervised fifteen federally funded studies that helped lay the foundation for the 5 Elements to overcome any addiction. A leading advocate for dual diagnosis treatment, Michael was nominated by Senator Ted Kennedy to the Senate Health Committee. He was a founding board member for the 12-Step organization Dual Recovery Anonymous, a national support group helping people suffering from combined mental health and substance abuse issues. He currently serves as the Chairman of the Board of American Addiction Centers, a behavioral healthcare company with treatment centers in California, Texas, Nevada, and Tennessee.

▼▲
Believable Hope is set in easy to understand language with full instructions on how to create a new life for oneself and I can't but admire the work and human kindness which has filled these people's lives.
From Eva Schwartz, Netgalley reviewer. (aka Stormhawk on goodreads.com)There are a lot of books in the self-help genre that you read once, put it down, and don't carry a lot away from. Believeable Hope is not one of those sorts of books. It is a story of a healing journey that invites you along, both to view the success of others, but to spur your own success, and to utilize your failures as motivations for change. There is not a lot of advice offered in this book, which makes it stand out from the crowd. What you do get is practical information and self-assessment tools that guide you to finding your own focus, make plans, act on them, adapting and improving when necessary. I look forward to returning to this book to help myself, as well as my clients in substance abuse treatment.

▼▲
I'm the author/artist and I want to review Believable Hope.
Back