Skip to main content
SPRING CYBER EVENT STARTS NOW: And it's a really BIG deal! Up to 88% off through 5/24>
What Belief Can Do: How God Turned My Pain Into Power and Tragedy Into Triumph-And How He Can Do the Same for You
By: Ron Archer, Mike Yorkey
Stock No: WW510528 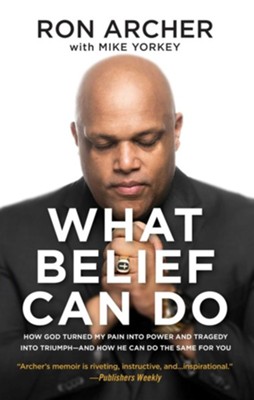 What Belief Can Do: How God Turned My Pain Into Power and Tragedy Into Triumph-And How He Can Do the Same for You

Ron Archer is an overcomer.

Ron Archer’s story will inspire you to trust God with the impediments facing you, whether big or small. Born to a biracial teenage mother forced by poverty to become a call girl, he survived an abortion his mother’s pimp forced her to have.

Abused by some, bullied by others, and rejected by a stepfather, Ron was a stutterer, a bed-wetter, and an overweight kid who banged his head against the wall to knock himself to sleep at night. At age ten, he decided to take his own life.

The gun did not fire.

Afterward, a schoolteacher and a widowed neighbor stepped in and shared the love of God with him—forever changing his life.

In this message-driven memoir, Archer shows readers how regardless of background and experiences, God can transform your pain into power and your misery into ministry.

In What Belief Can Do, readers will discover:
&bull; Everything we go through in life is a down payment on our destiny.
&bull; We are conceived and born with a divine design.
&bull; Loving, caring people who mentor a child can change his or her life.
&bull; Sometimes our greatest blessings are contained in our greatest challenges.

▼▲
RON ARCHER is an author, business executive, NFL chaplain speaker, and leadership trainer for corporations and the military. He has traveled the globe inspiring millions with his testimony and currently reaches more than 250,000 people a year through his speaking engagements.

▼▲
In his gritty debut, inspirational speaker Archer shares the story of his hardscrabble childhood and how it brought him to God’s grace. Born in 1963 in Cleveland, Ohio, Archer faced a litany of obstacles growing up: his teenage former prostitute mother had attempted to abort him; his home life is rife with abuse; he is sexually abused by a neighbor; and classmates ridicule him for his stutter. At the age of 10, he unsuccessfully attempts suicide. But a teacher changes the trajectory of Archer’s life by helping him master the spoken word-and find faith in God. With his newfound sense of identity, purpose, and community, 16-year-old Archer becomes a part-time preacher at Good Shepherd Baptist Church in Cleveland, where he helps lead his sister and mother to faith. Archer, who is African-American, then becomes senior class president and valedictorian of his 98% white private school. Peppered with observations on the cycle of poverty and racial prejudice-and how he overcame both-Archer’s memoir is riveting, instructive, and will appeal to Christian readers looking for an inspirational story.

-Publishers Weekly
Ron Archer’s story is captivating. As a "trick baby," his life was miraculously spared, and there’s no question in my mind, it was for God’s kingdom purpose. Ron is one of the most gifted communicators I know. I believe with his eyes fixed on Jesus and with a love for God and all his neighbors, he can help lead the too-often overlooked and "least of these" into a Promised Land life. He has supernaturally been transformed by the power of the gospel, and he wants everyone to experience the divine encounter Jesus referred to as being "born from above." I don’t think you’ll be able to put this book down, and everyone who cares about the future of freedom will want to hear him share not only his heart, but the heart of his heavenly Father.

▼▲
I'm the author/artist and I want to review What Belief Can Do: How God Turned My Pain Into Power and Tragedy Into Triumph-And How He Can Do the Same for You.
Back