Skip to main content
OUR BIGGEST BARGAIN SALE EVER: Over 6,000 deals at never-seen-before prices ~ through 8/23. Shop now >
Shalom and the Ethics of Belief: Nicholas Wolterstorff's Theory of Situated Rationality - eBook
By: Nathan D. Shannon
Stock No: WW110097EB 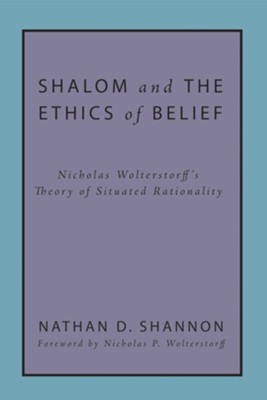 Shalom and the Ethics of Belief: Nicholas Wolterstorff's Theory of Situated Rationality - eBook

▼▲
Against the individualism and abstractionism of standard modern accounts of justification and epistemic merit, Wolterstorff incorporates the ethics of belief within the full scope of a person's socio-moral accountability, an accountability that ultimately flows from the teleology of the world as intended by its creator and from the inherent value of humans as bearers of the divine image. This study explores Nicholas Wolterstorff's theory of "situated rationality" from a theological point of view and argues that it is in fact a doxastic ethic based upon the theology of Wolterstorff's neo-Calvinist, Kuyperian background, which emerges in terms of his biblical ethic and eschatology of shalom. Situated rationality, the sum of Wolterstorff's decades-long work on epistemology and rationality is a shalom doxastic ethic--a Christian, common grace ethic of doxastic (even religious doxastic) pluralism.

▼▲
I'm the author/artist and I want to review Shalom and the Ethics of Belief: Nicholas Wolterstorff's Theory of Situated Rationality - eBook.
Back
Back