Skip to main content
SPRING CYBER EVENT STARTS NOW: And it's a really BIG deal! Up to 88% off through 5/24>
On Being a Pastor: Understanding Our Calling and Work
By: Derek J. Prime
Stock No: WW431226 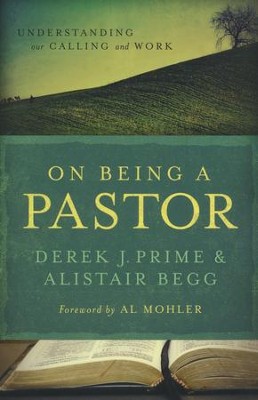 On Being a Pastor: Understanding Our Calling and Work

▼▲
On Being a Pastor is an essential tool to help pastors fulfill their calling. A pastor's responsibilities are unique, demanding that he nurture his own spiritual life as well as that of the people in his care.

The ministry of pastors is not simply a job; it’s a vocation and a lifestyle.

A pastor’s responsibilities are unique, demanding that he not only nurture his own spiritual life but also the lives of those in his care. What a challenge this can be!

Derek Prime and Alistair Begg provide practical advice for both the spiritual and practical aspects of pastoral ministry. They delve deep into topics such as prayer, devotional habits, preaching, studying, and specific ministry duties. The result is an essential tool for those in pastoral ministry.

▼▲
DEREK PRIME was born and brought up in London, where he received his secondary education at Westminster City School. National Service immediately followed for eighteen months, during which time he was attached as an army teacher to the Royal Scots Greys in Germany. Upon demobilisation he went to Emmanuel College, Cambridge, where he studied history and then theology. For the next three years he taught at a London Grammar School, prior to his ordination to become pastor of Lansdowne Evangelical Free Church in West Norwood in south London. After twelve years at Lansdowne he was called to Charlotte Chapel in Edinburgh where he was pastor for eighteen years. He then devoted himself to writing and an itinerant ministry. During this time, sadly, within a few years of one another, both his younger daughter and his wife died of cancer. However, he was greatly blessed in having his other daughter and older son in Edinburgh and second son in London, giving him the joy of eight grandchildren and eight great-grandchildren, an ever-growing family!

ALISTAIR BEGG (Trent University; London School of Theology; Westminster Seminary) was born in Scotland and spent the first 30 years of life in the United Kingdom. Since September of 1983, he has been the senior pastor at Parkside Church in suburban Cleveland, Ohio. He is the daily speaker on the national radio program Truth For Life which stems from his weekly Bible teaching at Parkside, and is the author of Made for His Pleasure, Lasting Love, and What Angels Wish They Knew. He and his wife, Susan, have three grown children.

▼▲
I'm the author/artist and I want to review On Being a Pastor: Understanding Our Calling and Work.
Back
Back