The Art of Being You: How to Live as God's Masterpiece - eBook
By: Bob Kilpatrick, Joel Kilpatrick 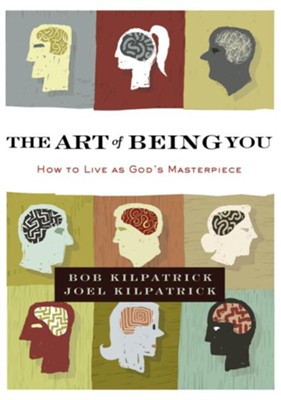 The Art of Being You: How to Live as God's Masterpiece - eBook

▼▲
I heard a well-known Christian musician say at a concert that God was in the business of fixing broken people. I went home and thought about that for a while, and I came to a different conclusion...That different conclusion, reached by singer/songwriter Bob Kilpatrick, has some interesting and exciting applications for re-thinking what it means to be a Christian.Rather than casting God in the usual role as architect and great mechanic of the universe, Kilpatrick instead paints a portrait of God as an artist—passionate, visionary—who considers humankind his masterpiece. God doesn't see Christians as broken beings chugging along in a fixed-up life. He sees us as new creations, whole, complete, and a stunning part of his creative process. It's a powerful perception of God, one that determines how much we understand and enjoy God, which, in turn, affects the entire course of our lives. We'll stop perceiving God based on what we lack, what we need repaired, and how weak we are, and come to know God as a creator who sees each one of us as a work of beauty and value. If we believe our relationship with God is one of artist/masterpiece/creative process, then we have every reason to rejoice in every stage of that process. The Art of Being You offers every reason to believe that God is preparing us for an amazing heavenly display.

Bob Kilpatrick is the composer of the classic worship songs In My Life, Lord, Be Glorified, Won By One, Ask Of Me (Here Am I) and I Will Not Be Ashamed, and the author of three books.  His songs have been used by every major Christian record company on millions of CDs and songbooks. He has sung and spoken in churches, conferences and festivals on every continent. Among the folks he's ministered with are Bill Johnson, Lincoln Brewster, Phil Keaggy, Dr. Jack Hayford, Anne Graham Lotz and Dr. Lloyd John Ogilvie. He is also the pastor of The Tree Christian Fellowship in Santa Rosa, California. He and his wife, Cindy, have five grown children and live in Fair Oaks, California.

Joel Kilpatrick is an award-winning journalist and author whose work has been featured in Time magazine, the Washington Post, USA Today, CBS Radio, the Dallas Morning News and dozens of newspapers and magazines. He has authored and ghostwritten more than 40 books, including a New York Times bestseller. He has reported from disaster zones and civil wars in seventeen countries, and received numerous prizes for writing and reporting.

Kilpatrick founded LarkNews.com, the world’s leading religion satire website which won the Dove award for humor (officially the Grady Nutt Humor Award) from the Gospel Music Association in 2005. He has won numerous awards for humor and reporting from the Evangelical Press Association. He was profiled in Time magazine, Christianity Today and on NPR, and has been featured twice in USA Today. LarkNews enjoys millions of visitors. Kilpatrick earned an MS degree in journalism from Columbia University Graduate School of Journalism in New York in 1995. He lives in southern California with his wife and five children.

▼▲
I'm the author/artist and I want to review The Art of Being You: How to Live as God's Masterpiece - eBook.
Back
×
Back
×