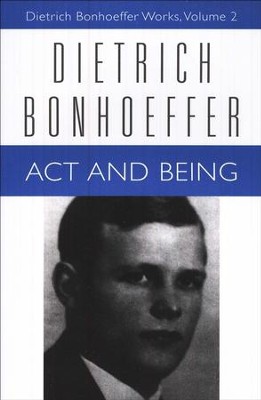 ▼▲
In Act and Being Bonhoeffer employs Lutheran theology in critique of philosophical claims about human consciousness from the Enlightenment (esp. Kant) up to his own time, including Heidegger. In doing so he provides a vindication for God self-disclosure against the beliefs expounded by the metaphysics of transcendental philosophy. Undoubtedly Bonhoeffer's most philosophical and abstract work, it is nevertheless crucial for understanding Sanctorum Communio, and, arguably, all of Bonhoeffer's theology. Bonhoeffer approaches human consciousness from the perspective of the Reformation that understands human sin as "the heart turned in on itself and thus is neither open to the Revelation of God nor to the encounter with the neighbor."

The fresh, critical translation of the volume is now available in paper. Act and Being, written in 1929-1930 as Bonhoeffer's second dissertation, deals with the questions of consciousness and conscience in theology from the perspective of the Reformation insight about the origin of human sinfulness in the "heart turned in upon itself and thus open neither to the revelation of God nor to the encounter with the neighbor." Here, therefore, we find Bonhoeffer's thoughts about power, revelation, otherness, theological method, and theological anthropology.

Wayne Whitson Floyd is Visiting Professor of Theology and Director of the Bonhoeffer Center, Luther Theological Seminary, Philadelphia. He is General Editor of the Dietrich Bonhoeffer Works, English Edition, and Canon Theologian at Cathedral Church of St. Stephen, Harrisburg, Pennsylvania.

Martin Rumscheidtis an ordained minister in the United Church of Canada and retired professor of historical theology at the University of Windsor, Halifax, Nova Scotia, and Charles University, Prague. He is the translator of Act and Being (1996)in Dietrich Bonhoeffer Works, English edition, and cotranslator with the late Barbara Rumscheidt of Soelle"s Against the Wind (1999) and The Silent Cry.

▼▲
I'm the author/artist and I want to review Act and Being: Dietrich Bonhoeffer Works [DBW], Volume 2.
Back
Back