Skip to main content
Being and the Messiah
Translated By: John Eagleson
By: Jose P. Miranda
Stock No: WW528161 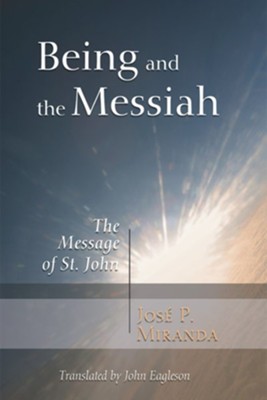 Being and the Messiah

▼▲
In 'Being and the Messiah', Jose Miranda brings his incisive (and controversial) scholarship to the study of The Gospel of St. John. I found 'Being and the Messiah' exciting reading, and, like 'Marx and the Bible', full of original, provocative, and highly controversial theses, brilliantly argued. Miranda is a master of polemics, and whether he takes on the whole history of Christendom or the entire establishment of biblical scholars, his wit is always equal to his outrage. Perhaps only an outsider could come to the Bible so fresh. Those who refuse to face this fox reveal themselves rabbits. --Walter Wink Professor of Biblical Interpretation Auburn Theological Seminary In 'Marx and the Bible', Jose Miranda served notice that he would raise questions and think thoughts that the scholarly world characteristically refuses to raise and is incapable of thinking. Now in 'Being and the Messiah' he has advanced his program of combining radical social criticism and radical hermeneutical exploration in a way which requires a quite fresh hearing of the Gospel. . . . . . . Miranda will not be pigeonholed by the academy. It is to be strongly hoped that he is taken seriously, for there is in his writing the kind of discernment which may reform and renew Scripture study. --Walter Brueggemann Professor Emeritus Columbia Theological Seminary Jose P. Miranda is also the author of 'Communism in the Bible' and 'Racionalidad y Democracia'.

▼▲
I'm the author/artist and I want to review Being and the Messiah.
Back