Skip to main content
Jesus in Beijing: How Christianity is Transforming China and Changing the Global Balance of Power
By: David Aikman
Stock No: WW980257 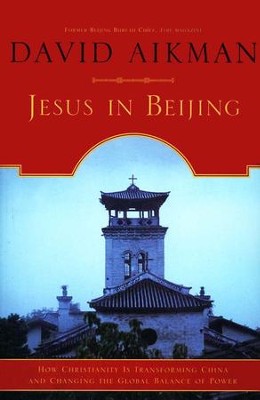 Jesus in Beijing: How Christianity is Transforming China and Changing the Global Balance of Power

▼▲
In Jesus in Beijing, David Aikman recounts the fascinating story of how Christianity began in China (even predating Francis Xavier and the Jesuits), the bloody anti-Christian persecutions (especially under the Communists), the revival of an underground Christian movement led by brave men and women risking death, and the flowering of Christianity-though still under persecution-today with the result that China is actually producing missionaries to the world.
While China's Communist rulers hope to reap the social and economic benefits of Christianity without losing power, as David Aikman so provocatively points out, the Chinese dragon just might be tamed by the Christian Lamb. Few books change the way a reader views the world. Jesus in Beijing is one of those books.

▼▲
Politics are being transformed by religion, namely in China—within the next thirty years, one-third of this potential superpower could be Christian.

If this religious transformation occurs, China would be one of the largest Christian nations in the world.

David Aikman, former Beijing bureau chief for Time, unveils this spiritual revolution, detailing the impending political-religious conversion of the People’s Republic of China and potential overthrow of its Communist Party through Jesus in Beijing: How Christianity is Transforming and Changing the Global Balance of Power.

▼▲
I'm the author/artist and I want to review Jesus in Beijing: How Christianity is Transforming China and Changing the Global Balance of Power.
Back
Back