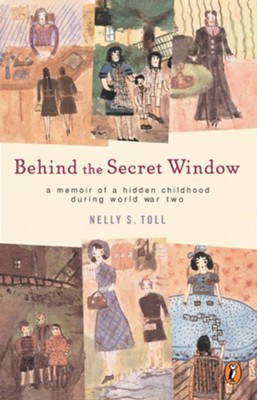 Behind the Secret Window

The Nazis come to Poland when Nelly is six. By the time she turns eight, the events of World War II have taken almost everyone she loves. Scared, lonely, and running from the Nazis, Nelly hides in the bedroom of a Gentile couple in Lwow, Poland. For over a year, she lives in fear of discovery, writing in her diary and painting pictures of a fantasy world filled with open skies and happy families.

For 13 months during World War II, the author and her mother were hidden from the Nazis. Like Anne Frank, Nelly kept a diary and through that outlet transformed her grim reality into an enchanting fantasy world.

"Without emphasizing horror and loss, Toll conveys the effects of human evil and human folly, summoning up the forces of tragedy and courage." --Publishers Weekly

"In Toll's remembrance, art equals hope: her happy family pictures, painted in the secret room where she and her mother hid from the Nazis and the Poles, show extraordinary preteen talent as well as the will to survive." --Kirkus Reviews

▼▲
Dr. Nelly S. Toll came to America in 1951. She holds a master's degree in art and art history and education from Rutgers University, has studied at the Academy of Fine Arts in Philadelphia, and received her Ph.D. from the University of Pennsylvania. She has exhibited her adult work widely and has taught both art and art history. Dr. Toll also holds a master's degree in counseling from Glassboro College and a degree in art therapy from Hahnemann University; she has combined both fields as a counselor working with young people.
Her sixty-four watercolor paintings from the thirteen months she spent in hiding in Poland during World War II have been shown around the world. Eight ar in the permanent collection of the Yad Vashem Museum in Israel.
She is also the co-author of a play based on her wartime experiences and the author of Without Surrender: Art of the Holocaust.

▼▲
I'm the author/artist and I want to review Behind the Secret Window.
Back