Skip to main content
OUR BIGGEST BARGAIN SALE EVER: Over 6,000 deals at never-seen-before prices ~ through 8/23. Shop now >
The Devil behind the Surplice: Matthias Flacius and John Hooper on Adiaphora - eBook
By: Wade Johnston
Stock No: WW107821EB 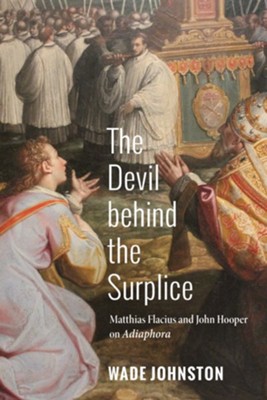 The Devil behind the Surplice: Matthias Flacius and John Hooper on Adiaphora - eBook

▼▲
Between 1548 and 1551, controversies over adiaphora, or indifferent matters, erupted in both Germany and England. Matthias Flacius Illyricus in Germany and John Hooper in England both refused to accept, among other things, the same liturgical vestment: the surplice. While Flacius' objections to the imperial liturgical requirements were largely contextual, because the vestments and rites were forced on the church and were part of a recatholicizing agenda, Hooper protested because he was convinced that disputed vestments and rites lacked a biblical basis. The Devil behind the Surplice demonstrates that, while Flacius fought to protect the reformation principle of justification by grace alone through faith alone, Hooper strove to defend the reformation principle that Scripture alone was the source and norm of Christian doctrine and practice. Ultimately, Flacius wanted more Elijahs, prophets to guide a faithful remnant, and Hooper wanted a new Josiah, a young reform king to purify the kingdom and strip it of idolatry.

▼▲
Wade Johnston serves as assistant professor of theology at Wisconsin Lutheran College in Milwaukee, Wisconsin. Before that, he served ten years as a parish pastor in Michigan. He is also the author of An Uncompromising Gospel: Lutheranism's First Identity Crisis and Lessons for Today.

▼▲
I'm the author/artist and I want to review The Devil behind the Surplice: Matthias Flacius and John Hooper on Adiaphora - eBook.
Back
Back