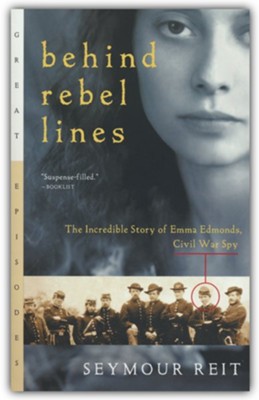 ▼▲
The true story of a Civil War spy who fooled the rebels - and her own troops. In 1861, when war erupted between the states, President Lincoln made an impassioned plea for volunteers. Determined not to remain on the sidelines, Emma Edmonds cropped her hair, donned men'sclothing, and enlisted in the Union Army. Everyone, even her fellow soldiers, thought she was a man.
But Emma wanted to do more. When she heard a key Union spy had been captured and executed, she volunteered to take his place. Soon she was a cunning master of disguise, risking discovery and death at every turn. Emma had fooled her own army but could she keep her secret behind enemy lines?

▼▲
Seymour Reit, the creator of Casper the friendly ghost, blends fact with fiction in this captivating tale about one woman who dared to go behind enemy lines as a spy for the Union Army.

Canadian-born Emma Edmonds loved the thrill of adventure and chasing freedom, so in 1861 when the Civil War began, she enlisted in the Union Army.

With cropped hair and men’s clothing, Emma transformed herself into a peddler, slave, bookkeeper and more, seamlessly gathering information and safely escaping each time.

This fictionalized biography about the daring exploits of a cunning master of disguise, risking discovery and death for the sake of freedom, will inspire readers for generations to come.

▼▲
SEYMOUR REIT is the author of more than eighty books for young readers. An experienced animated cartoonist, he is also the creator of Casper the Friendly Ghost. Mr. Reit lives in New York City.

▼▲
“The story is fast-moving, and Emma’s spunk...is evident.”—Kirkus Reviews
“This stranger-than-fiction story will captivate history buffs and hold the attention of the most reluctant reader.”—Bank Street College of Education
“A suspense-filled account of a brave and loyal feminist.”—Booklist

▼▲
I'm the author/artist and I want to review Behind Rebel Lines: The Incredible Story of Emma Edmonds, Civil War Spy.
Back
Back