We are OPEN and SHIPPING - click here for shipping estimates
PRE-SUMMER CYBER SALE EXTENDED thru 6/1 ~ Over 2,500 items up to 90% off
Behind the Blue and the Gray: The Solider's Life in the Civil War
By: Delia Ray 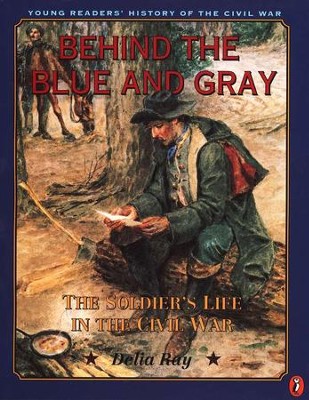 Behind the Blue and the Gray: The Solider's Life in the Civil War

▼▲
Telling the story of the "common soldier", Behind the Blue and Gray tells the stories of the men who fought and died behind the walls of smoke and battlefield commotion. Comprised of actual letters, photographs and essays on the Civil War, this personalized view of the war is touching and a good reminder of the sacrifices made throughout history. 102 pages, softcover.

▼▲
In this second of a three part series, this book traces the events of the Civil War from the first battle to the surrender with emphasis on the experiences of the individual soldiers.

Whether they wore Union blue or Confederate gray, the untrained recruits of the Civil War quickly learned to endure the hardships of the army life. They experienced the horrors of battle, rampant disease, makeshift hospitals and prison camps, and even boredom. Drawing on letters, diaries, eyewitness accounts, and many vintage photographs, Behind the Blue and Gray explores the lives of soldiers from all walks of life, from all-black Northern regiments to young boys who lied about their age to enlist.

Also in this series:
A Nation Torn: The Story of How the Civil War Began
A Separate Battle: Women and the Civil War

▼▲
Delia Ray is the author of numerous fiction books for young readers including Ghost Girl and Singing Hands. She has also written three young-adult nonfiction books about American history. She lives with her family in Iowa City, Iowa.

▼▲
I'm the author/artist and I want to review Behind the Blue and the Gray: The Solider's Life in the Civil War.
Back
×
Back
×