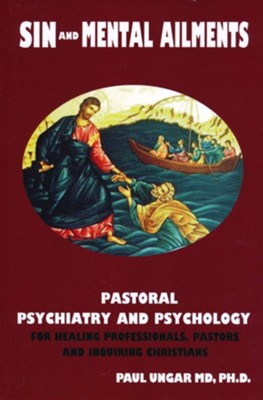 In Romans 7:15, St. Paul expressed frustration with something all of us can relate to, saying, "I do not understand what I do. For what I want to do I do not do, but what I hate I do." Despite our best efforts to live our lives as we ought to, we repeatedly fall into the trap of "not understanding what we do," and constantly perpetrating the same missteps we have previously vowed never to take again. What is the reason of our deeply ingrained fallibility? Christians do what they hate either because they consciously, deliberately and sinfully transgress Jesus’ commands, or because they are experiencing unintended and often unconscious symptoms of mental ailments. The interconnectedness of sinful and psychologically disordered behaviors is undeniable. Malignant selfishness, which we recognize as sin, is often linked to narcissistic character features. Repeated belligerent acting out may be rooted in a paranoid mindset. Emotional cruelty may be not freely chosen but tied to antisocial personality traits; sinning against the sixth commandment can be driven by the illness of pedophilia. The reverse is also true: most mentally disordered behaviors involve some form of intentional and sinful violation of Jesus’ command. Though the boundary between sin and sickness may appear fuzzy at times, a thorough understanding of their interplay is of utmost importance when faced with matters of freedom of choice, conscience, responsibility and, most of all, pastoral care.

This comprehensive handbook on pastoral care successfully integrates the biblical and medical/scientific perspectives on human anthropology, mental illness and sin. It expounds on the signs of all major mental ailments and provides recommendations for their pastoral and medical treatment. Problems from psychoses to mood disorders, suicide to sexual disturbances, anxiety to addictive behaviors, and ailments in between are explained. Readers will find new insights on the ways in which various personality disorders interfere with spiritual functioning. Developmental stages in life are also discussed, together with the spiritual challenges they pose, and the pastoral answers they call for. This work does not shy away from controversial topics, such as post-abortion syndrome, euthanasia, gender ideology, or the psychological aspects of atheism. Soundly faith-based, yet well-grounded in contemporary psychiatric knowledge, this handbook captures a lifetime of learning and healing by practicing psychologist who holds an MD, PhD, and a graduate theology degree. It is an indispensable practical reference for all pastoral workers.

▼▲
I'm the author/artist and I want to review Sinful Behaviors and Mental Ailments: Pastoral Psychiatry and Psychology for Healing Professionals, Pastors and Inquiring Christians.
Back
×